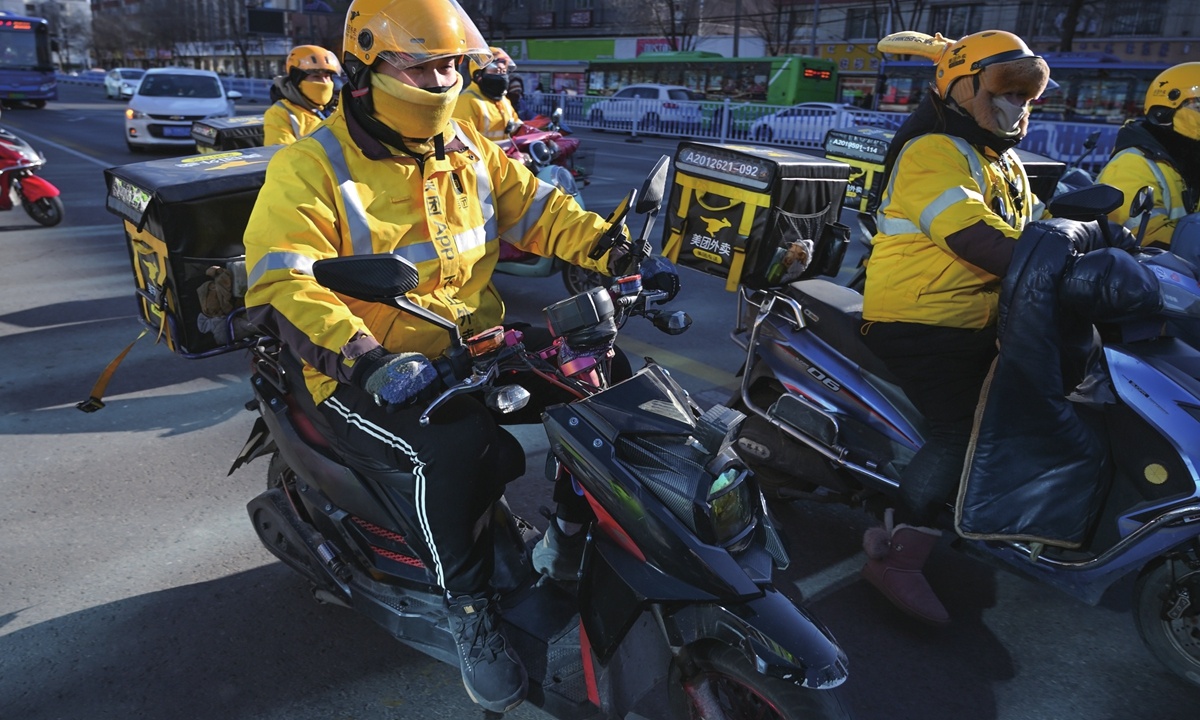 Meituan takeaway staff drive on the road in Hohhot, North China's Inner Mongolia Autonomous Region. China's logistics prosperity index in November stood at 57.5, up 1.2 points from the previous month, while the warehousing index was 56.9, up 4.1 points. (Photo: agencies)

Chinese largest online food delivery platform Meituan vowed on Wednesday to improve working conditions for its vast network of deliverymen after an official at the Beijing municipal government undertook one day's delivery work and exposed certain issues, including low wages.

Meituan had held 22 meeting to discuss about 50 queries and recommendations from deliverymen to improve their working experience, including addressing order allocation mechanism, a green channel for appeals and adding extra holidays for delivery men to look after their families, according to a report from the Beijing Daily newspaper on Wednesday.

The swift response from Meituan came after a viral video showed a field investigation by Wang Lin, an official of Beijing Municipal Human Resources and Social Security Bureau, who volunteered to work as a Meituan deliveryman for a day. During his 12-hour-working shift, Wang completed five orders and earned only 41 yuan ($6.32) in total.

Wang said that the delivery fee is too difficult to earn based on the platforms' order allocation mechanism. "I had questions about why deliveryman always receive so may orders, now I realize they have to complete orders as many as possible if they want to get enough income," said Wang.

Following Wang's experience, many on social media have called on Meituan to focus on improving deliverymen's wages and insurance policies.

"The platform's design of the allocation system need to be adjusted but the delivery fee paid by consumers is likely to be raised as well," said a netizen named "Lawyer Yang Wenzhan" on Sina Weibo.

Public criticism over Meituan's treatment of its deliverymen also came as the company faces tight regulatory scrutiny over its business practices. China's top market regulator on Monday launched an investigation into Meituan over suspected monopolistic practices.