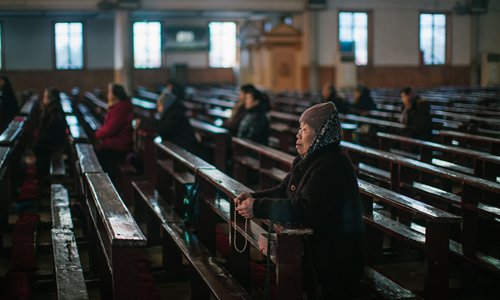 Villagers pray in a church in Liuhe village, North China's Shanxi Province, where most of the residents are Catholic, in December 2015. (Photo: Global Times)

Over 20 years ago, when Luo Wen, then a seminarian in the diocese of Mindong in East China's Fujian Province, was training for the priesthood, he sometimes discussed the future of the church with his teacher Guo Xijin, who was then a priest."Father Guo told us that if the day comes when China and the Vatican normalize their relations, we, the underground church, would be marginalized," Guo told the Global Times."After all, we don't have the opportunity to receive formal education in theology, and our theological knowledge and insights cannot compare with priests who graduated from formal seminaries."Luo is a member of China's "underground church," which for decades has been split from the State-sanctioned Chinese Catholic Patriotic Association (CCPA), swearing allegiance to the Pope but considered illegal by the Chinese government.But with the signing of a landmark provisional deal between China and the Vatican on September 22, what underground bishop Guo Xijin anticipated 20 years ago - the normalization of relations between China and the Vatican - may soon become reality, though the underground church is not necessarily "marginalized."Joseph Zhang (pseudonym), a priest in a church in northern China which is under the State-sanctioned Chinese Catholic Patriotic Association, said the outside world should not polarize the above-ground and underground churches. He asked for anonymity due to the sensitivity of the issue."For me, the State-sanctioned and the underground churches have always belonged to one church," he told the Global Times.Luo, now a priest, cited the anecdote at the beginning of the article to show that the underground church had always been mentally prepared for such an agreement.Luo said even if one day the details of the full agreement are revealed and are not the same as what he had hoped for, he will follow the decision in the agreement unconditionally. "Our obedience has nothing to do with our personal gains or losses, but is what our faith requires of us, and requires of every clergy member," he said."This agreement, at the very least, will prevent illegal appointment of bishops, " he noted.In a letter addressed to the Catholics of China and to the Universal Church on September 26, Pope Francis called for the Catholic community in China to be "united, so as to overcome the divisions of the past that have caused, and continue to cause great suffering in the hearts of many pastors and faithful." He said all Christians must now offer gestures of reconciliation and communion.The Pope's request was well received by Chinese Catholics.China's State-sanctioned Catholic organizations have said they will "wholeheartedly support" the provisional agreement, according to a statement published on the website of the Catholic Church in China on September 23.Integrity and abilityAlthough the provisional agreement marks the first step toward the thawing of ties between China and the Vatican, many questions remain unresolved. While the Vatican has recognized seven bishops who were appointed without previous papal approval, the future of the underground bishops who were not recognized by the Chinese government, reportedly over 30 in number, is still unrevealed.Zhang said he hopes they can be recognized soon. Professor Wang Meixiu, an expert on Catholic studies at the Chinese Academy of Social Sciences, said that while it is still too early to tell what will happen to the underground bishops, she is optimistic that the two sides will make an effort to resolve it."The issue of underground bishops is a complicated one that will require much consideration and discussions from both sides and a long time to resolve. But with the signing of the provisional agreement, the two sides will work on it step by step," she told the Global Times."Whether they are bishops originally from the State-sanctioned church or the underground church, we hope that those highly esteemed ones with integrity and ability will become leaders of the dioceses," Luo said.The talks between China and the Vatican have also received opposition from long-term critics, such as Hong Kong Cardinal Joseph Zen Ze-kiun.On October 3, for the first time in decades, two Catholic bishops from the Chinese mainland attended the Synod, a major Vatican meeting of bishops worldwide, according to the website of the Vatican press office. One of them is Bishop Guo Jincai, one of the seven bishops newly recognized by the Vatican.However, Cardinal Zen wrote on his personal blog that their attendance is "an insult to the good Bishops in China and to the Synod of Catholic Bishops."Luo said it is probably best for Cardinal Zen to change his view."The agreement is set in stone. What we need to do is to face reality, and steer the future to a better course," he told the Global Times.Responding to Cardinal Zen's claim that the Catholic Church was "selling out" Chinese underground Catholics in January, the Vatican said in a statement that it was surprising and regrettable that some people in the Church were "fostering confusion and controversy," Reuters reported in January.