CHINA Memories that shall not fade

Memories that shall not fade 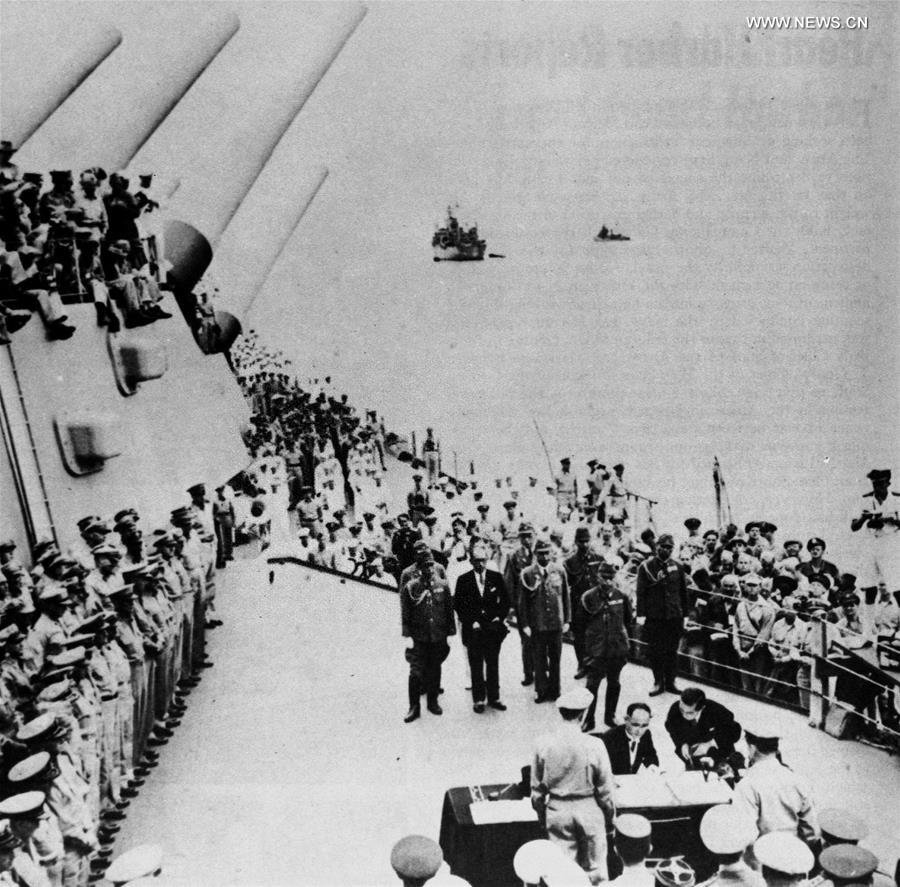 Tokyo (Xinhua) -- As Japan marked the 73rd anniversary of the end of World War II on Wednesday, war witnesses and experts said the atrocious war should never be forgotten and measures should be taken to prevent the war's tragedies from reoccurring.

For Nobuo Okimatsu, a 93-year-old World War II veteran, Aug. 15 is a day that he could never forget. Born in 1925, Okimatsu's life largely overlapped with Japan slipping into the abyss of the invasive war and finally declaring unconditional surrender on Aug. 15, 1945.

Okimatsu entered middle school in 1937. Though people in his hometown talked little about the Lugou Bridge Incident that year that marked Japan's full invasion of China, Okimatsu could feel that militarist thoughts were prevailing.

"People took pride in becoming a soldier at that time. I was also determined to go to the Imperial Japanese Army Academy," he told Xinhua.

That same year, the Japanese troops captured Nanjing, the then Chinese capital, on Dec. 13, and in some 40 days following the capture, more than 300,000 Chinese civilians and unarmed soldiers in Nanjing were slaughtered and 20,000 women raped.

In 1945, then 20-year-old Okimatsu became a Kamikaze pilot in the Japanese army. After three months' training, he along with other soldiers were tasked with a suicidal mission to crash into the Allies' ships.

Luckily for Okimatsu, his mission was delayed that day and then stopped by Japanese Emperor Hirohito declaring Japan's unconditional surrender.

Okimatsu later called that day his "rebirth" and told of his experience and the sufferings of his family in the war.

"Many historical problems in Japan nowadays are rooted in the lack of knowledge and recognition of history," he said. "It's an obligation for us who have experienced the war to pass on our memories and promote Japan's friendship with its neighbors to eliminate the factors that could cause wars," he added.

Kazuya Iwamura, commentator from the Kyodo News who was born after the war, says Aug. 15 is significant for Japan as "it marks the starting point of Japan's postwar pacifist period and economic development."

After the war ended, Japan achieved fast economic development, for which the peaceful environment facilitated by the pacifist Constitution was no doubt a precondition.

"To prevent these war tragedies from happening again, it's really necessary to reflect on what happened on Aug. 15 and the postwar history," said Iwamura.

Okimatsu became a high school teacher after the war. In 1975, haunted by the memories of war, he joined an anti-war organization founded by a group of Japanese veterans who had taken part in the aggression. Later, the organization renamed itself "Aug.15 Japan-China Friendship Association."

The organization published a monthly journal titled "Aug. 15," calling for reflection and a preservation of historic memories.

"In the past year, we published the journal monthly. We have also participated in rallies to call for protection of the pacifist Constitution and activities promoting friendship between Japan and other countries," 93-year-old Okimatsu told Xinhua.

It's just one example of how some in Japan have made ceaseless efforts to convey to the younger generations a true sense of history despite the obstructionist work by the ultra-rightist forces.

Another example was a documentary released last year by Japan's public broadcaster NHK titled "The Truth of Harbin Unit 731" which revealed the outrageous crimes committed by Unit 731, a covert biological and chemical warfare research and development unit of the Imperial Japanese Army that undertook lethal human experimentation during WWII.

The documentary, while irritating the ultra-right wing forces, allowed many Japanese learn the truth of the war and reflect upon history.

On Tuesday, designated "Comfort Women Day" in South Korea, around 100 people attended a memorial event held at the Woman's Active Museum on War and Peace (WAM) in Tokyo.

"We held the yearly event calling for people from all over the world to pay attention to the 'comfort women' issue," said Eriko Ikeda, chairwoman of WAM, Japan's only museum focused on wartime sexual violence against women.

"The Japanese government should face up to this problem," she said.

Reflection and preservation are the best way to ensure peace and face the future, historians here have said.

But with the aging of those who experienced the war, there are concerns that the younger generation would become immune to the need preserve the past.

"Our generation has a strong feeling for the day Aug. 15. But the situation is gradually changing for the younger people," said Tase Yasuhiro, political analyst and Nikkei columnist.

During an annual national ceremony to mourn the war dead on Wednesday, Japanese Emperor Akihito reiterated his "deep remorse" over the country's past actions.

"Reflecting on our past and bearing in mind the feelings of deep remorse, I earnestly hope that the ravages of war will never be repeated," said the emperor who is set to abdicate next year.

Prime Minister Shinzo Abe, also attending the ceremony, renewed his pledge not to repeat the tragedy of war, but again refrained from mentioning Japan's wartime aggression at the annual event.

"For some people in Japan, Aug. 15 has been seen as a day of humiliation for Japan as it had to surrender unconditionally," said Okimatsu.

"But in fact, we should think of it as a day for Japan's rebirth," he added.

To his delight, the Aug.15 Japan-China Friendship Association has now also attracted some young members, including teachers, students and white-collar workers.

"I really hope the younger generation could learn more about that history," said Okimatsu. "Without true historical recognition, without reflection upon the war, there will be no true friendship between Japan and other countries including China."