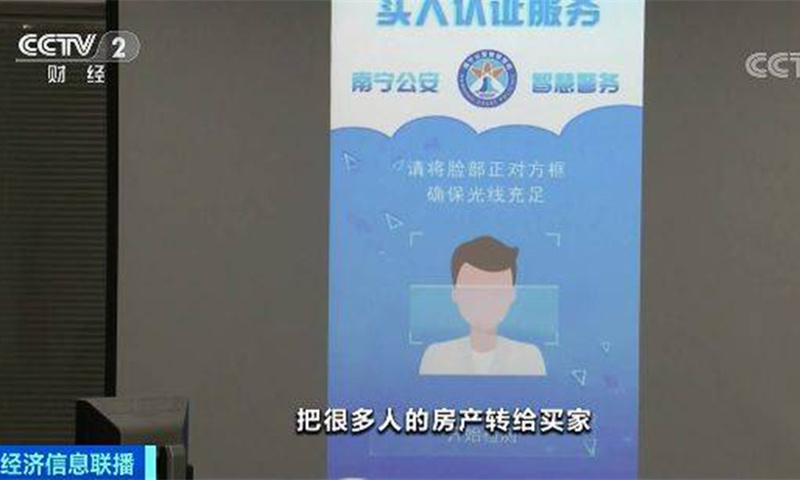 More than 10 citizens in a southern Chinese city reportedly found their houses had been secretly sold after their facial recognition information was improperly collected.

A man surnamed Li in Nanning, South China's Guangxi Zhuang Autonomous Region, went to a local property agency in September to sell his house, where he was asked by an agent, named Wei Yuanpeng, to have his facial recognition information collected, China Central Television (CCTV) reported on Wednesday.

Wei scanned Li's face with a mobile application "Yongedeng" on Li's phone, the official online service platform of the local property registration authority. Wei, however, lied to Li that his facial information would be only used to access files, but actually Wei secretly changed the ownership of Li's house to another person using his facial information, according to CCTV.

The Nanning property registration center said on Thursday that it has upgraded its Yongedeng APP after hearing about the incident. The improved APP "clearly shows users what their facial information will be used for every time they scan their face," a staff member from the center told the Global Times.

Besides Li, Wei had also changed the ownership of at least 10 people's houses using their facial recognition information, valued at some 10 million yuan ($1.53 million), said CCTV. The local police launched an investigation on Wei and froze all transactions involving the houses in question, it added.

Wei's behavior will likely be considered fraud and his actions will be brought under China's improving laws and regulations on protecting citizens' personal information, said legal experts.

China's future Personal Information Protection Law will regulate the collection of personal information in public areas, such as facial recognition information, so that it can only be processed for public security purposes, and individuals must be aware that their data is being collected, said a lawyer named Shi Yuhang. The law just ended its public comment period recently in November.

The Civil Code will come into effect in January 2021 and also requires that collectors must make its purpose, method, and range clear to involved people and obtain their permission, Shi said. "Then, we will have more legal basis to protect our personal privacy," he told the Global Times.

At the local level, several Chinese cities including Tianjin Municipality already issued policies to ban the illegal collection and abuse of facial information even before the national law comes into effect.