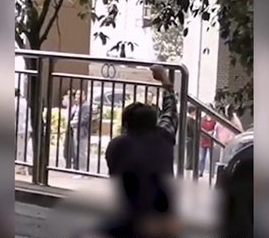 Suspect Feng rode and attack the victim. (Photo: A screenshot of thepaper.cn)

The murder of a 9-year-old boy has attracted widespread attention after the suspect's parents said he is mentally ill and concerns arose that mental illness would be an excuse to escape punishment.

The public security authorities of Changsha, Central China's Hunan Province, announced on Saturday on Sina Weibo that a local man, surnamed Feng, was under criminal detention after he was arrested for brutally assaulting and killing a 9-year-old boy surnamed Luo in the residential community they lived.

Police said they received the report about three minutes after local residents saw the incident on Tuesday afternoon. About 19 minutes later, the suspect was subdued by his father and other witnesses.

Feng was holding a screwdriver. He rode and strangled the boy, news site thepaper.cn reported.

Chinese netizens called for severe punishment receiving many likes, with some believing that mental illness is no shield for immorality.

"Whether the killer was in a state of mental illness at the time of the crime is the key to the verdict of this case, if he's a real psychotic," Liu Dalai, a lawyer from Beijing Lianggao Law Firm, told the Global Times on Sunday.

Zhang Zanning, a law professor at Southeast University, who focuses on issues associated with the mentally ill, told the Global Times that although Feng is likely to escape a death sentence, he will receive compulsory medical treatment in mental hospital mandated by the government, as his behavior is of great social harm.

Zhang said that the suspect's guardians shall undertake the civil compensation responsibility for insufficient guardianship.

According to the police, there were no people nearby in the first three minutes of the attack. Some people then appeared and called the police immediately after seeing the violence.

Some witnesses who helped stop the suspect told media that the child had already died when they saw the violence.

Some netizens argued, when facing such violent attack, whether it is safer to protect ourselves first and call the police rather than fighting with the perpetrator with sharp weapons.

According to thepaper.cn, the boy's father also blamed the security guards of the community management company for untimely helping his son. The distance between the crime scene and the guard booth is reportedly about 200 meters.