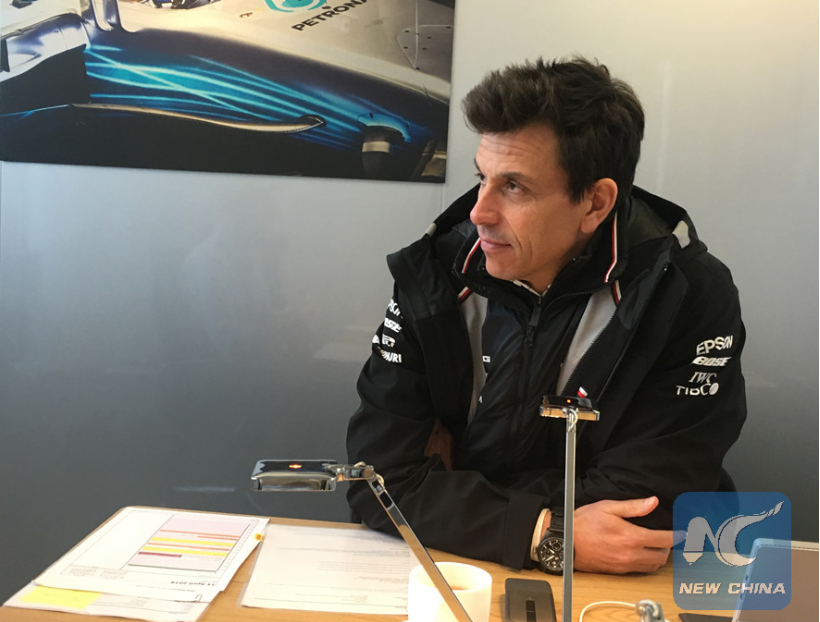 Mercedes team principal Toto Wolff said he loves the potential of China, and that he hopes Formula 1 can continue to grow in the country.

Speaking exclusively to Xinhua in Shanghai after Saturday's qualifying session for the 2018 Chinese Grand Prix, the Austrian talked up the job prospects for young people living in China today.

"I love the potential of the country. You look at China, and there is a huge market. The opportunities are great. You can go from being a dishwasher to a billionaire, and simply that thought is amazing. If I was a student and I was deciding where to live, I would move to China and explore the opportunities. It's just amazing."

With his Mercedes AMG Petronas F1 team likely to be fighting for victory in Sunday's Chinese Grand Prix, Wolff also praised the enthusiasm of Formula 1 fans in China.

"You can see the grandstands here are full and the fans are cheering for the drivers. You can even hear them when Kimi Raikkonen or Lewis Hamilton fly by. When Lewis arrives at Shanghai airport in Pudong and goes into the main arrival hall, it's like the Beatles are arriving! I hope Formula 1 can attract more Chinese fans and continue to build its fanbase in China."

Wolff's comments came after a disappointing qualifying session for Mercedes, with drivers Valtteri Bottas and Hamilton only finishing third and fourth. This comes after Ferrari's Sebastian Vettel managed to beat the Mercedes drivers to victory in the first two races of the 2018 season. However, Wolff would not be drawn on whether his team was worried about its prospects for this year.

"I'm always worried. Even if we win I'm worried we'll lose the next race. The mindset we have is that you need to stay calm and analyse why. That is why we have won so many races over the last four years."

The Austrian added, "We haven't suddenly lost our understanding of the car, and equally, the car is not suddenly going slower. It is a matter of having the right set up and not making mistakes in key areas. This is what we need to concentrate on rather than getting worried about the championship."

Wolff also defended his driver Valtteri Bottas, after the Finn came in for criticism from some sections of the media after the Bahrain Grand Prix for lacking a "killer instinct".

"You cannot judge when you're not in the car. I think Valtteri is a great driver. If he lacked the killer instinct, he wouldn't have the qualifying times that he has. He has outqualified Lewis 2-1 so far this season, so if you can drive that car that fast, against the best driver in the world, you have killer instinct, I can guarantee you that."