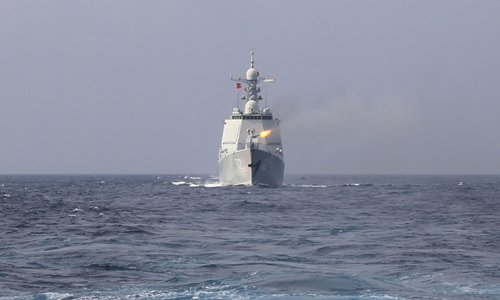 Another Chinese naval scientist working on full electric propulsion (FEP) received a first-class merit citation on Wednesday, a year after a colleague on his team was likewise honored. Experts said the honors reflect the rapid development in China's FEP warships.

An FEP ship is much more efficient in terms of power usage compared to traditional vessels, and the technology could enable warships to be equipped with futuristic weapons such as lasers and electromagnetic railguns, they said.

Xi Jinping, chairman of the Central Military Commission, signed the orders awarding a first-class merit citation to Wang Dong, a professor with the Naval University of Engineering in Central China's Hubei Province, the Xinhua News Agency reported on Wednesday.

While it is not yet known Wang's exact achievement in his field, military analysts said the rare merit citation is possibly due to his contribution to the development of electric propulsion systems for Chinese warships.

Wang, 41, is a member of the team led by Ma Weiming, a professor at the university and an academician of the Chinese Academy of Sciences, according to navy.81.cn, the People's Liberation Army (PLA) Navy's website.

With Wang as a core member, Ma's team developed the concept of medium-voltage direct current FEP technology in a world first in 2003, while other countries such as the US and UK are using alternating current, said a release posted on the website of the Hubei government.

The alternative current FEP system is overly complicated and highly interconnected, so a small problem could cause a major failure, Wu Jian, editor of Defense Weekly under Shanghai-based Xinmin Evening News, told the Global Times on Thursday, noting that the direct current method is more stable, although more challenging in the design phase.

An FEP system enables a vessel to allocate power anywhere it needs, while on traditional vessels, some power is designated for propulsion even though ships seldom sail at full speed. This leaves a considerable amount of power unused, analysts said.

Wu pointed out that with FEP, this wasted power could be used for high-energy weapons, the operation of which was previously not possible due to limited power supply.

Li Jie, a Beijing-based naval expert, told the Global Times that these power-consuming weapons might include lasers and electromagnetic railguns.

In 2018, Xiao Fei, another key member of Ma's team, was awarded a first-class merit citation for the direct current FEP system, PLA Daily reported then.

"One characteristic of Ma's team is that they not only focus on scientific development, but also on putting their innovations into practice," Wu said, noting that this is the reason why many awards went to them.