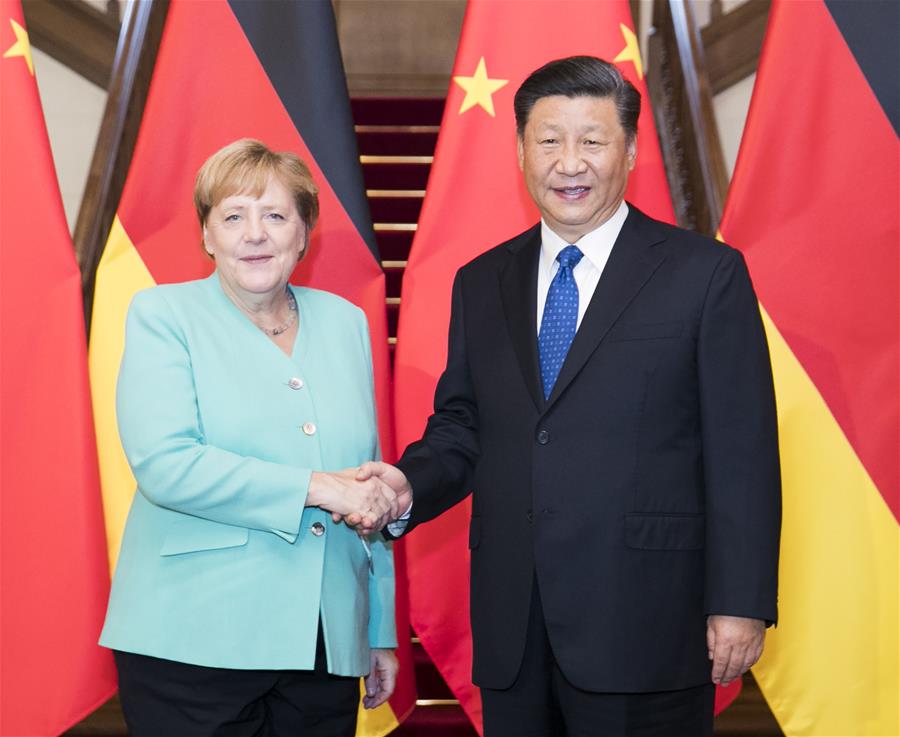 German Chancellor Angela Merkel's visit to China is set to bring fresh opportunities for the world's second- and fourth-largest economies to revive their businesses and economies, which have been hurt by the China-US trade war and global uncertainties, analysts said.

"The Chinese market is large enough and will grow larger as China develops," said Xi.

Xi said China's greater opening-up is gradually extending from the manufacturing sector to financial and service sectors, which will bring more new opportunities to Germany and the rest of the world.

China has been rolling out measures in recent years to open up its market, and German enterprises tend to benefit most from such moves, said Cui Hongjian, director of EU Studies at the China Institute of International Studies in Beijing.

He cited the removal of the stake cap for foreign firms. German automaker BMW made history in China's auto industry last year by becoming the first international carmaker to hold a majority stake in a joint venture. It increased its stake in BMW Brilliance Automotive to at least 75 percent from its 50 percent holding.

"It's equally important for Germany to widen its market to Chinese investment. German firms are always favorable merger and acquisition targets of Chinese capital," Cui told the Global Times Friday.

As two of the world's strongest economies, China and Germany have more common interests under multilateralism. Thus, the two countries should stick to future prospects provided by opening-up and free trade, according to Cui.

"Only by creating an open business environment can a country's economy thrive, especially amid global uncertainties," said Chen. "China is taking the initiative to promote opening-up, and that is the reason why our economy has withstood the trade war," Chen explained.

Merkel said the trade war between China and the US affects the whole world and hopes it will be resolved soon, according to a Reuters report.

Germany's economy has been dragged down by global uncertainties and the trade war, which have taken a toll on its manufacturing sector, as well as its exports.

In the second quarter of the year, Germany's GDP contracted 0.1 percent compared to the previous quarter, down from a 0.4 percent expansion in the first three months of the year, data from the German Federal Statistics Office showed in August.

Facing a grim prospect and bumpy road ahead, Europe's largest economy needs a "good prescription" to cure its economy, which might face a recession. China can be a key partner in economic and trade ties, according to Chen Fengying, a research fellow at the China Institutes of Contemporary International Relations.

Chen said the time has come for Germany to accelerate its pace in transforming its traditional manufacturing sector, represented by auto production and machinery making, which has reached a very high level of quality and complexity.

"However, the impact on its real economy due to the trade war has made the country realize it needs to push technological innovation," Chen noted, adding the newly emerging high technologies represented by artificial intelligence, autonomous driving, 5G networks and digital economy can be the areas for China and Germany to strengthen their cooperation.

"On those fronts, China has seized a leading position in the world, and its experience can help Germany," said Chen.

Merkel also brought up the recent tumultuous situation of Hong Kong, according to media reports. She said political dialogue - not violence - is the path toward a resolution, the Associated Press reported.

The Chinese government unswervingly safeguards "one country, two systems" and "Hong Kong people administering Hong Kong," said Chinese Premier Li during the meeting, according to some Hong Kong media. Li is the most senior Chinese official to speak publically on the Hong Kong issue so far.

Li said Beijing supports the Hong Kong government's efforts "to end the violence and chaos in accordance with the law, and to return to order, which is to safeguard Hong Kong's long-term prosperity and stability."

Merkel talking about the Hong Kong situation was not intended to exert pressure on the Chinese government, but more like to respond to pressure from domestic and international forces, Sun Keqing, a research fellow at the China Institutes of Contemporary International Relations, told the Global Times.

Germany's policies toward China used to be more ideology-based, but in recent years, they have become more pragmatic, and the two share more and more mutual interests, said Shi Mingde, former Chinese ambassador to Germany.

German and the European Union leaders understand that Hong Kong is China's domestic affairs and bottom line, because they know China will never entertain any interference in its own affairs, said Sun.

It is not hard to imagine if the violence in Hong Kong, such as charging at the Legislative Council Complex, illegally seizing journalists and beating up police officers happened in the West, said Wu.

He said when German and French police dealt with protesters at the 2017 G20 Hamburg summit and "yellow vest" protesters, people supported the police and said they were maintaining order and strongly condemned violence. "How could the same picture invite a different interpretation in Hong Kong's case?" asked Wu.

In July, 22 countries, including Germany, signed a letter to the UN calling on China to close "re-education camps" in Northwest China's Xinjiang Uyghur Autonomous Region.

This move was later lambasted by Geng Shuang, spokesperson of the Chinese Foreign Ministry, who called it "unprovoked accusations and attacks."

Ties between China and Germany will undergo ups and downs, but the changes will mainly come from Germany, Shi predicted.

After Merkel steps down in two years, her successor will also swing back and forth from pragmatic to values-based policies toward China; but the two will eventually settle their differences as stability and practicability remain the cornerstone of the bilateral relationship, Shi said.