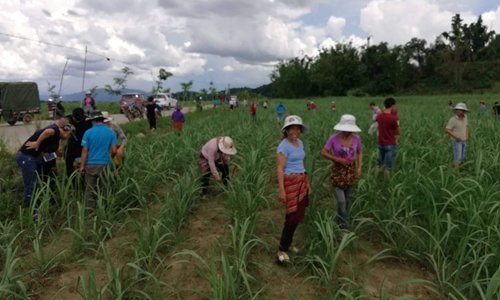 ○ Hundreds of villagers have been scouring the area, leaving their crops unattended

In a sugarcane field along a cement road in the village of Manlun, Xishuangbanna Dai Autonomous Prefecture, Southwest China's Yunnan Province, many villagers are wearing straw hats and bowing their heads, looking at the ground.

They are not busy farming but rather searching for meteorites.

On June 1, the villagers were frightened and thought there were drunks coming to vandalize houses. What they heard was not hooligans, but fragments of space rocks tearing through rooftops, as gigantic meteorites flamed across the Xishuangbanna sky.

The word quickly spread that the meteorite fragments are valuable. Farmers working in the sugarcane fields found several stones. This sent the villagers into a crazed hunt for the fragments in the surrounding fields.

Many meteorite hunters from out-of-town came to join the search, feeding the frenzy. Rumors spread about the high prices that could be fetched.

Some villagers tried to sell the chunks of rock they found for 50,000 yuan ($7,800) per gram - dozens of times the normal price for meteorites, according to China National Radio. This price is "far beyond reasonable," meteorite experts said, expressing pessimism that the villagers could make a sale.

The craze has raised official alarm, and local government officials have issued warnings to villagers, saying that meteorites should be valued for their scientific worth rather than being used as a gimmick for overnight wealth.

The fever is in fact a microcosm of Chinese society's widely spread obsession with rare and mysterious exotic objects from outer space.

The reverence for such fallen space debris has long spawned a host of hunters enraptured by travelling to remote areas in search of meteorites. Now the potential high price for the meteorites makes people even more obsessed.

Three days after the meteorites fell from the sky, villagers were still frantically hunting for the rocks.

About 600 out-of-towners, including experienced collectors, flocked into the fields for a scavenger hunt.

A female who found a meteorite displayed it excitedly, attracting onlookers to take photos.

The dark, exotic and egg-sized meteorites are seen as black gold by villagers, driving some to kneel down to worship them.

Other villagers who had found meteorites were in rapture - anticipating a 300-gram meteorite could fetch as much as 120,000 yuan.

The mother of Yan Wenxiang, a villager from Mangui, found a stone amid a tea plantation.

According to local media yunnan.cn, the 1,280-gram meteorite is the largest ever found in the community. Since the day of its discovery, there has been a steady stream of buyers, offering prices ranging from 400,000 yuan to 800,000 yuan. But Yan doesn't want to sell it unless "the price can reach 1 million."

Similar stories happened in a nearby village, where many villagers made a huge fortune from selling the meteorites.

The local government has issued a statement in a bid to cool down the "craze." "Please take a rational view of the meteorite crash and do not blindly believe that you can be a millionaire overnight by snatching up meteorites. A good life is one determined by your own efforts."

However, the statement apparently failed to deter the ongoing "treasure hunt." Enthusiasts gathered at Manlun village to search for the meteorites in the fields. Cars clogged the village and blocked the road.

He Bei, head of the publicity committee of Mengzhe county, told Red Star News that the meteorite hunting brings not only enthusiasts, but also meteorite speculators.

"They spread rumors like '50,000 yuan for one gram' among the villagers. Villagers all gave up their farm work and went to the fields where the meteorites fell to find them."

He suggests that "meteorite fever" has begun to affect normal production and life, with a large number of people searching for meteorites in sugarcane fields, possibly damaging crops and causing disputes.

He said that the local government has organized police and a village defense team to prevent riots.

"The meteorite trade is private so the government should not over-intervene. However, what remains to be noted is that early germination of rice paddies requires the care of farmers. We have made this reminder many times through the village broadcast system."

A former engineer of the Beijing Planetarium museum, Zhang Baolin, worries that driving up the meteorite prices will, on the one hand, result in people's inability to sell them, and "destroy local folk customs" on the other hand.

"What fell in the rice paddies has not been completely discovered, and the villagers are so intent on looking for treasure that they not only leave crops uncultivated, but may also cause family discord," Zhang told Red Star News.

He said he heard of a family of three brothers who split a meteorite into three to end a dispute.

"Meteorites have the most valuable information when they have just fallen from the sky. The longer they stay on the ground, the more likely they will deteriorate, and the fewer things can be learned."

Jiang told Beijing Youth Daily that when he arrived in Xishuangbanna on June 3, many villagers were willing to sell the meteorites they found. But soon after the villagers became greedy and were unwilling to sell any more. Even if they were willing, the asking price was too high.

Li Bofang, a meteor enthusiast and member of the International Meteor Organization, said the mass hunt was sparked mainly by two reasons.

"First is the inflated prices and illusionary market bid up by unscrupulous dealers who wish to take the chance to sell their own fake goods. Second, local business owners are quite willing to pay huge sums to buy the stones from outer space that fall in their area," Li told Red Star News.

The meteorite trade in China is not regulated. Zhu Jin, curator of the Beijing Planetarium museum, sent experts to Yunnan for collecting meteorites.

He confirmed that the meteorites which fell in Yunnan look to be truly from outer space. But they did not originate on the moon or Mars. They are rather ordinary chondrites, with a lot of samples available. They are not valuable.

Zhu told the CNR that the price for a chondrite meteorite is relatively cheap in the international market, possibly fetching one yuan per gram. Those in a good shape can be worth 10 or 20 yuan a gram. If its fall has a lot of witnesses, the price can be between 40 and 50 yuan per gram, but not as much as "you heard in the village."

One meteorite expert, who has studied the market for many years, said that compared with other collectibles, meteorites are not priced to a uniform standard. But the prices being asked for the meteorites in Xishuangbanna, which soared to tens of thousands of yuan per gram, don't make sense to him.

"The main value of meteorites lies in their scientific value, not their economic value," said Zhu. Under ordinary preservation conditions, the outer layer of a meteorite will gradually oxidize due to contact with air, reducing its value.

"Meteorites used for scientific research or displays in museums must meet strict requirements in size and shape. Thousands or even tens of thousands of yuan per gram for an average meteorite is excessive, and deviates far from the rules of the market," he said.

Experts worry that some people will take advantage of the inflated market to sell fake meteorites. But Zhu believes that there is little point, because ordinary chondrite meteorites are cheap in the first place.

As more fallen meteorites are gradually discovered in the fields, ownership remains a grey area without a general consensus, due to the lack of relevant laws in China. Experts believe that the country should legally claim to own the meteorites, but the discoverers should be duly rewarded.