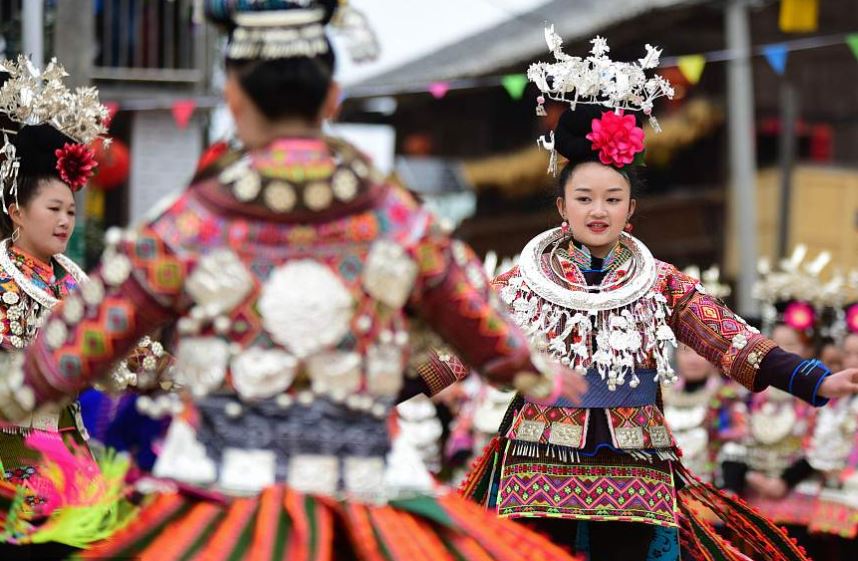 The Lunar New Year is marked differently around China, and for members of the Miao ethnic group, celebrating the turn of the year means bringing out ornate headgear and intricately-made dresses and gathering for a ceremonial folk dance.

Residents of Paijie Village and neighboring towns in Danzhai County, southwest China's Guizhou Province descended on Lusheng Square to celebrate the Chinese New Year in the same way they have for decades – performing the Jinji Dance.

The traditional dance translates to "Beautiful Phoenix," in reference to the bird that the group considered an element of worship in ancient times.

The dancers, mostly middle-aged women, sported silver jewelry on their heads, wrapped colorful laces around their waists and donned long dresses with silver medals and tassels to symbolize the plumage of the phoenix.

They then swayed in sync imitating the way the bird paced, moved and fluttered its wings, to the melody of lusheng, an ancient Chinese reed pipe, and the beat of bronze drums.

The Jinji Dance was listed as a national intangible cultural heritage in 2006, and the Miao people hold an annual competition to promote and protect the tradition.

In the 1980s, the traditional dance was introduced to Italian, Hungarian, and Austrian crowds among others by the Southeastern Guizhou State Troupe to much acclaim.