Wang Jie, who claims to be a well-known Michael Jackson imitator, is holding a concert on New Year's Day but the event has been hit by a boycott by some of Jackson's Chinese fans. 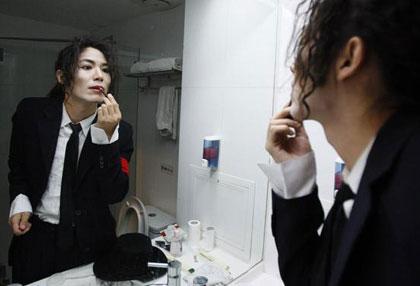 The "best imitator of Michael Jackson"

The press conference for the concert was held in Jinan, capital of East China's Shandong Province. Wang attended the conference with the name of Jackson Wang, local media iqilu.com reported.

The report said that Wang will perform Jackson's best-known hits at the concert including "Beat it" and other favorites. "Through sound and light effects, as well as holographic sci-fi images, audiences will experience the charm and magic power of Jackson Wang, the best imitator of Michael Jackson," it said.

Wang has received a lot of compliments in many media reports for imitating Michael Jackson. He was given the Outstanding Contribution Award at the Shanghai World Expo, the 2010 China Internet Celebrity Award, and was named Harmony Star by the World Harmony Foundation, according to a report by Sina News.

Wang was invited to perform by the United Arab Emirates and held a Michael Jackson tribute concert at Abu Dhabi Zayed Stadium, the report said. He even received plaudits from former US president Bill Clinton, it said.

"These are all fake and made up by Wang's management company. He does not have any fame overseas at all," a member of Jackson's Chinese fan club told the Global Times on Monday, adding that many of Wang's overseas performances have obvious traces of fraud.

"Many photos of his overseas performances were forged by his company. He just posed and can show off back to China," said the fan, who wished to remain anonymous. "Someone arranged for him to meet with the Jackson family and take group photos, and then he claimed that he has been recognized by the family with these photos."

The Jacksons don't know who he is at all, the fan said.

Other fans also expressed skepticism about Wang. Most fans in a WeChat group said they would boycott the Shandong concert when they heard about it.

According to screenshots of chat records in the group offered by the fan, many fans said that Wang does not have enough ability to imitate Jackson but forged such a reputation for himself in order to earn money. "His ability to sing and dance is not very good but he makes up achievements to crow about," one of the fans wrote.

"There are lots of Jackson imitators around the world and we do not reject all of them, but this man is just using Jackson's fame to earn money," another wrote in the chat group.