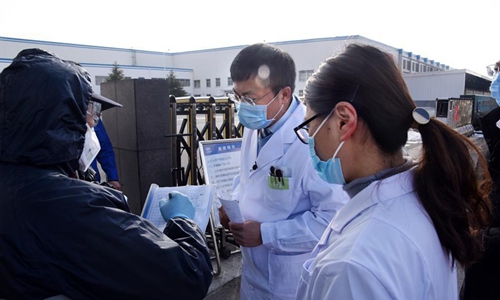 While China is striving to return to work amid the COVID-19 outbreak, some migrant workers from Central China's Hubei Province found it more challenging for them to find a job or go back to work in first-tier cities due to enhanced prevention and control measures, which partially fueled discrimination against people from the province.

A news video clip circulating on social media shows that some jobseekers in Shenzhen, South China's Guangdong Province, are being rejected by temporary hotels due to their identity as people from Hubei, the most virus-stricken province, and they had to sleep on the streets.

A migrant worker, who did not return to Hubei during the Spring Festival holidays, was kicked out by his landlord recently as he is originally from Huanggang, a city neighboring Wuhan that was also hit heavily by the virus.

They also found it more difficult to find a job as some companies refuse to recruit people from the province. "Whether it's for a delivery person or security guard, they don't want to hire Hubei people now," a migrant worker was quoted as saying in the news report.

Some even spoke harsh words toward us such as "the disease comes from Hubei, you don't have any chance [to get the job]," he said.

Some factory owners in Dongguan, a manufacturing hub in Guangdong, have told workers from Hubei not to come back as scheduled due to concerns that people from the epicenter of the outbreak appeared to be highly contagious, and could pass the virus to others.

"There are some recruitment signs in Dongguan showing that factories don't hire people from Hubei," a local worker surnamed Yang, who has been working in the electronics industry for years, told the Global Times on Tuesday.

A construction site worker from Chongyang county in Xianning, Hubei, told the Global Times that it is now impossible for migrant workers to return to work as most of the traffic between the province and other regions has been cut off. "I paid rent for my room in Guangzhou in advance before I returned to my hometown, fearing the landlord will kick me out," he said, noting that construction work has been suspended for about 10 days.

"We sometimes mock ourselves that Hubei people have become a 'scourge,'" he said.

The world's second-largest economy had about 290 million migrant workers in 2019. Hubei has also recorded a large number of outflow workers, as the central provinces saw numbers of migrant workers grow by 2.4 percent year-on-year in 2019, official data showed.

Shen Jianfeng, a professor with the Law School of the Central University of Finance and Economics, said that excluding specific labor groups from competition in the labor market without reason or non-relevant standards constituted employment discrimination.

It is geographical discrimination to explicitly exclude workers from specific regions, he noted.

"Under the current pressure of epidemic prevention and control work, it seems reasonable for companies to be more cautious concerning workers from Hubei for safety reasons, but the goal could be achieved by other methods including health checks, temperature screening or travel history investigations," Shen said, noting that employers should not just simply shut the door to them.

The outbreak has already become a major test not only for governance in Hubei but also for authorities across the country, analysts said, urging that policymakers should not come up with "one-size-fits-all" ideas, or implement policies in a reckless way.

Some netizens on Weibo also claimed that discrimination will lead to more social problems including high unemployment and social instability, and authorities in other regions should deal with the problem from a more humane perspective.

"Refusal is the simplest and roughest treatment. It is understandable that people would refuse when they have been trapped in ignorance and panic at the beginning of the outbreak," Shen said, noting that as the epidemic has been evolving for about a month and people have a more rational understanding about it, dealing with the matter in such a simple and rude way is not appropriate.