CHINA Military cemeteries envisioned for those who served

Military cemeteries envisioned for those who served 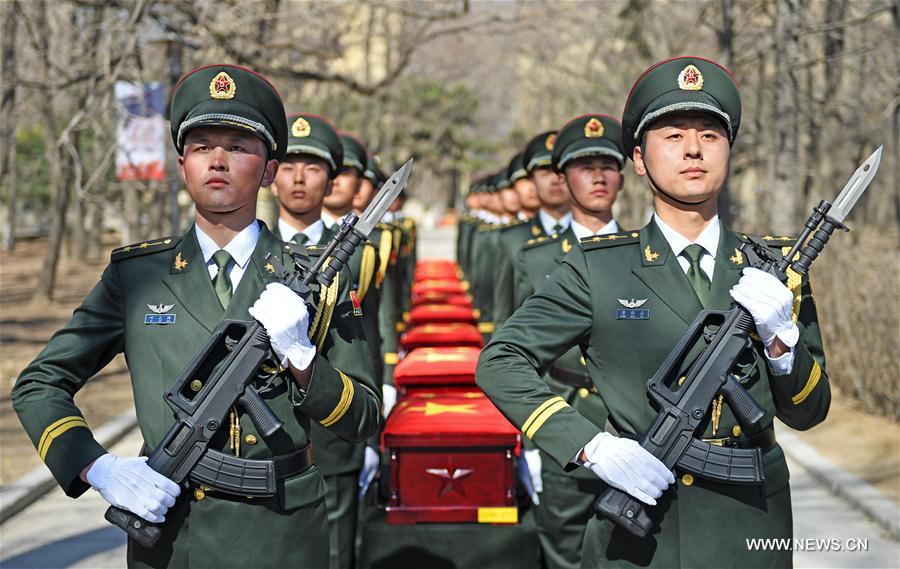 Soldiers escort coffins containing the remains of Chinese soldiers killed in the 1950-53 Korean War during a burial ceremony at the Cemetery of Revolutionary Martyrs in Shenyang, Northeast China's Liaoning province, March 29, 2018. (Photo: Xinhua)

China will set up dedicated cemeteries for military personnel and their relatives as a way to honor their service and enhance national identity and pride, according to the Ministry of Veterans Affairs.

Building and maintaining military cemeteries is a key mission for the ministry, as well as an important part of enhancing services to retired veterans, Wang Zhiming, the director of the ministry's general office, said recently.

"It also has great significance in improving national pride and honor for military personnel and their families, and making military careers more respectable," Wang said. The ministry is learning from experts and foreign practices to create a grand design for the cemeteries, and details will be released in due time, he said.

The remains of more than 1.4 million martyrs are resting in around 4,200 protected memorials, ranging from cemeteries to columbaria. However, many of these buildings are dedicated to noted individuals or specific military campaigns and not general military personnel, the Ministry of Civil Affairs has said.

This is because not all the dead are military personnel. Martyrs can also include civilians who died in war, or people who sacrificed themselves for the greater good, according to chinamartyrs.gov, a government website dedicated to Chinese heroes. For example, college student He Dongxu, 19, died saving two drowning children in 2009, and was buried at the martyrs' cemetery in Yichang, Hubei province.

While honoring every martyr for their sacrifice is important, the current classification might lead to confusion for the families of martyrs and visitors, especially for those who just want to pay their respects to military personnel.

Moreover, some martyr cemeteries were found selling expensive grave sites to wealthy buyers or leasing the cemetery's surrounding area to shops or real estate developers, all of which are against the rules, according to media reports.

To solve such recurring problems, Qian Feng, vice-minister of the Ministry of Veterans Affairs, held the first meeting on military cemetery management in Nanning, Guangxi Zhuang autonomous region, this month. Qian, along with veterans' affairs officials from 11 provinces, met to discuss the functions, eligibility, operation and burial conditions for military cemeteries.

Gong Fangbin, a professor at the People's Liberation Army's National Defense University, told Beijing Youth Daily that it is important for China to build cemeteries dedicated to military personnel for their symbolic significance and to bolster national identity and pride.