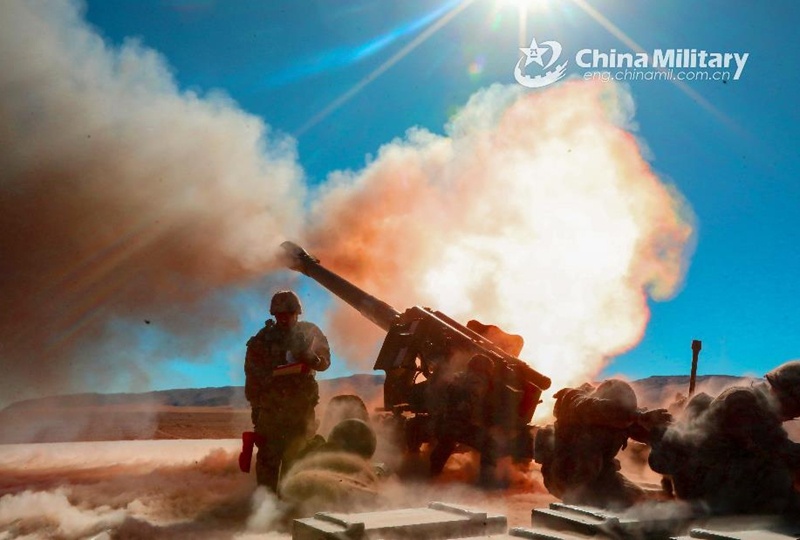 Artillerymen assigned to an artillery brigade under the PLA Xinjiang Military Command operate a self-propelled howitzer to attack a mock target during a live-fire test at the altitude of 5,200 meters in China's Xinjiang Uygur Autonomous Region in late October, 2020. (Photo: Agencies)

Upon receiving requisition orders for large platform trailers, related departments immediately initiated national defense mobilization protocols, rapidly assembled a large number of civilian transport equipment and personnel. They enhanced the trailers’ bearing capacities, modified their width, installed them with related equipment including camouflage, so the trailers can transport main battle tanks, according to the report.

Using trailers is a key method for rapid, tactical or strategic deployment and relocation of tanks and armored vehicles, Shanghai-based news website eastday.com reported on Monday, noting that the caterpillar tracks of tanks limits their long-distance maneuverability in favor of off-road maneuverability.

This method not only extends the tanks’ combat range, it also reduces fatigue of troops who operate  tanks, the report said.

Labeled “Strike 1000,” the 4X4 all-terrain combat vehicles were rapidly manufactured, the report said, noting that while this type of vehicle is lightweight and has little armor, it has very high mobility and bearing capacity, the report said.

The requisition of equipment is a key part of national defense mobilization, and plays an important role in Chinese military’s war preparedness in the new era, Weihutang, a military program affiliated with China Central Television (CCTV), reported on Tuesday, noting that according to foreign data, more than 80 percent of key civilian technologies can be used for military purposes.