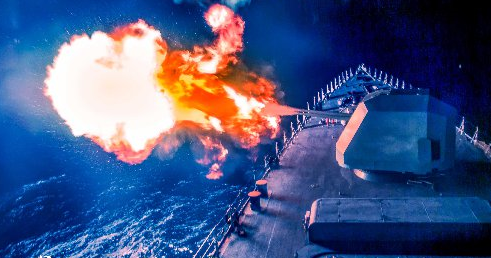 The guided-missile destroyer Shenzhen (Hull 167) attached to a destroyer flotilla with the navy under the PLA Southern Theater Command fires its main-gun at night during a round-the-clock maritime training exercise on such subjects as live-fire operation, alongside replenishment-at-sea, ship maneuvering and so forth, in waters off the South China Sea in late May, 2019. (Photo: GT)

China has started military exercises in both the East and South China Seas near coastal areas, according to two navigation restriction notices released by maritime safety authorities on Sunday and Monday.

The military exercises in the East China Sea started at 6 pm on Sunday and is scheduled to conclude at 6 pm on Thursday, according to a Sunday notice released on the website of the Maritime Safety Administration of China.

According to coordinates provided in the notice, the restriction zone covers a large area not far from the east coast of Zhoushan and Taizhou, East China's Zhejiang Province.

Another military activity is to take place in the South China Sea, off the coast of South China's Guangdong Province, said a separate Maritime Safety Administration notice released on Monday.

This military activity started at 6 am on Monday and is expected to end at 6 pm on Friday, the notice released on Monday reads.

The two military activities are essentially taking place in waters north and west of the island of Taiwan.

People's Liberation Army (PLA) drills are annually scheduled, but some secessionists on the island have been making irresponsible comments, and the US, a major country from outside of the region, has been sending warships through the Taiwan Straits and even sold weapons to the island, so this week's military drills could serve as a deterrent, Wei Dongxu, a Beijing-based military analyst, told the Global Times on Monday.

Wei pointed out that this time the drills are being conducted in two different areas at almost the same time, which is a demonstration of the PLA's strength, determination and capability to safeguard the sovereignty and territorial integrity.

After the US approved a plan to sell $2.22 billion worth of arms to the island earlier this month, China's Defense Ministry announced a military drill near the southeast coast of the Chinese mainland. It is not known if the two military activities mentioned by the Maritime Safety Administration are related to the drill announced earlier by the Defense Ministry.

Experts previously told the Global Times that the drills announced by the Defense Ministry are expected to be big, involve all military branches of the PLA, and serve as a warning to Taiwan secessionists.