As a large number of Chinese supporters deliriously waved national flags and began to shout "China! China! China!" in the Wuhan National Fitness Center Stadium on Monday, it felt like the pinnacle of a flawless journey. However, anyone who knows anything about the women's football in this nation will know that this is just the start of something that could rejuvenate a fallen giant. 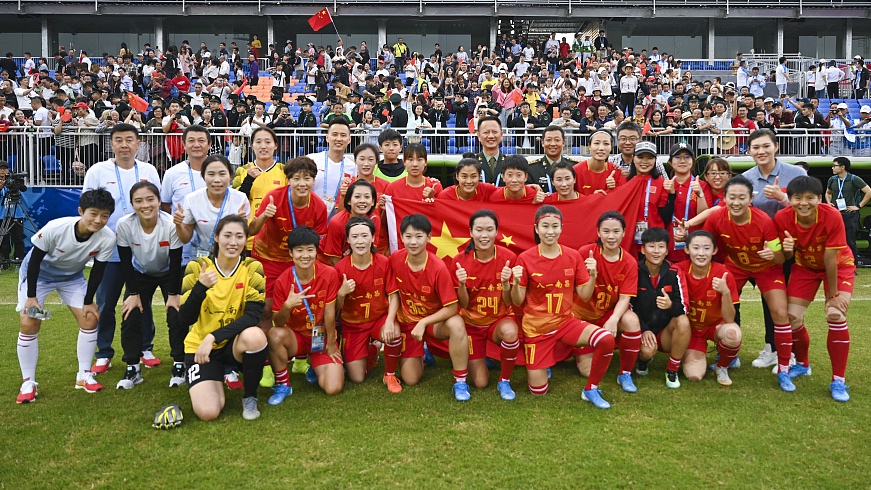 Chinese players pose for a photo with the celebrating fans after winning their last group stage game against U.S. at the Military World Games in Wuhan, China, October 21, 2019. (Photo: VCG)

China had just mauled the U.S. 4-0 in their final group game at the 2019 Military World Games in scintillating style, with Yang Li, Lyu Yuting, Xiao Yuyi and Liu Yanqiu all registering on the scoresheet. Fresh off their 3-0 demolition of South Korea and 4-0 dismantling of Germany, the Group A winners now have nine points, three clean sheets and seven different goal scorers.

Sterner tests are sure to come in Thursday's semi-final, but the self-assured, swaggering performances shown so far have all the hallmarks of champions.

Things did not look so rosy before the Games. China's women's football has seen unprecedented lows this summer as the national team, who have long been considered a powerhouse, suffered their worst run at the World Cup since 1991. The uninspiring performance has drawn widespread criticism at home and prompted some to lose faith in "the Steel Roses."

There are fears that this Chinese squad, of which nine members have gone through the World Cup ordeal in France, will step onto the Military World Games stage to a lukewarm reception. But such worries were quickly dispelled as fans were turning out in numbers to flood the stadium in support of their heroines.

While China initiated waves upon waves of attacks against a brittle American side before a thundering and sellout crowd, Tian Dan put her arm firmly around her 7-year-old daughter and said: "My little girl has always wanted to play football. And I think these Chinese players set a perfect example. They are confident, diligent and extremely polite."

"When the substitution was made, the player who is about to be replaced even bowed to the crowd before leaving the pitch. There's a lot of buzz going around here."

Chen Ruijun, who attended China's all three outings to date, also delivered a full-throated endorsement of the thrillingly frenzied atmosphere.

"The love for China goes above and beyond expectation. Some of us are still smarting from the epic failure at the World Cup, but the Military World Games create an opportunity to bring fans together and cheer our team up with a change in mindset," said Chen, sweat dripping from his forehead due to the unusually hot weather in Wuhan.

"China deserves much more respect and support. As anyone can see right now, passions are running high. Everybody is shouting as one. These are the scenes that bring tears to the eye."