CHINA Ministers make push to get climate talks over the line

Ministers make push to get climate talks over the line

SHARM EL-SHEIKH, Egypt (AP) — Government ministers are returning to Egypt to take over negotiations at this year's U.N. climate talks, providing diplomats with the political backing they need to clinch credible agreements that would help prevent disastrous levels of warming in the coming decades. 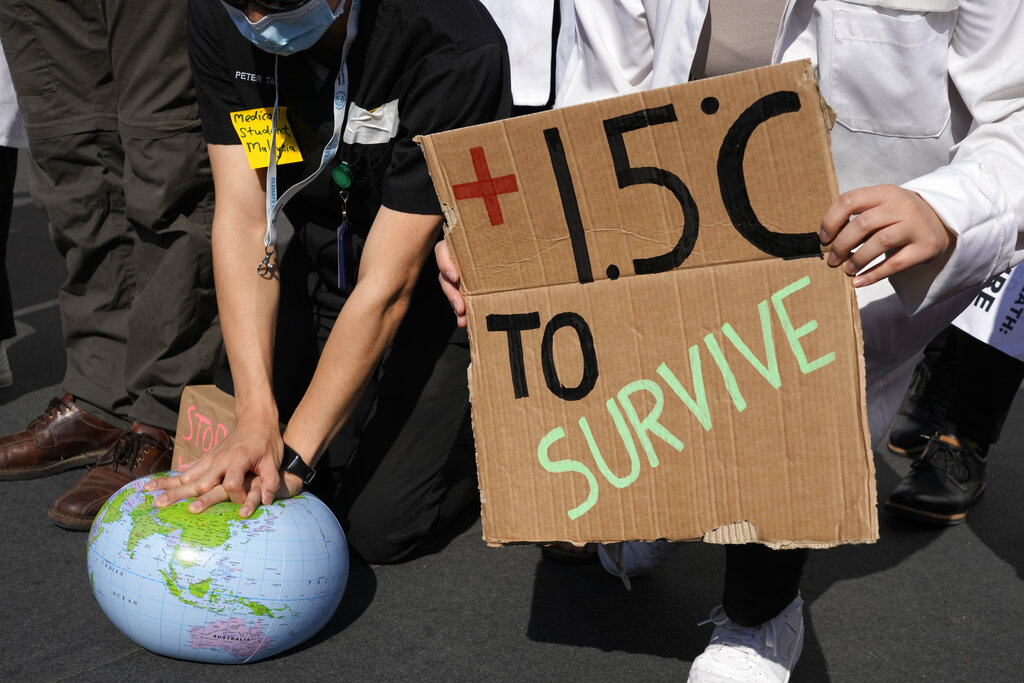 Demonstrators pretend to resuscitate the Earth while advocating for the 1.5 degree warming goal to survive at the COP27 U.N. Climate Summit, Wednesday, Nov. 16, 2022, in Sharm el-Sheikh, Egypt. (Photo: AP)

Talks in the Red Sea resort of Sharm el-Sheikh got off to a plodding start and are behind the pace of previous meetings with three days left before the scheduled close Friday. But a small thaw in relations between the United States and China at the Group of 20 meeting in Bali has boosted hopes that the world's top two polluters can help get a deal over the line in Egypt.

U.S. climate envoy John Kerry confirmed Wednesday that he and his Chinese counterpart Xie Zhenhua had resumed formal talks after they were frozen three months ago by China in retaliation for U.S. House Speaker Nancy Pelosi’s trip to Taiwan.

Asked what his goal for the outcome of the meeting was, Kerry was cautious, however.

Delegates have been haggling over whether to restate the 2015 Paris accord's headline goal of limiting global warming to 1.5 degrees Celsius (2.7 Fahrenheit) and the rules countries set themselves for reducing greenhouse gas emissions.

Officials from developing nations, meanwhile, are pushing for rich countries to make good on pledges of further financial aid for those struggling to cope with global warming. One significant aspect of that could be payments for ‘loss and damage’ resulting from climate change, which developed countries have long resisted for fear of being held financially liable for the carbon dioxide they've pumped into the atmosphere for decades.

But there has been a softening of positions among some rich nations that now acknowledge some form of payment will be needed, just not what.

“Countries that are particularly affected, who themselves bear no blame for the CO2 emissions of industrial nations such as Germany, rightly expect protection against loss and damage from climate change,” German Foreign Minister Annalena Baerbock said as she departed for Egypt.

She acknowledged that negotiators have “a difficult path” ahead of them for a substantial agreement.

Geopolitical tensions have been reflected at this year's talks, with European Union delegates walking out of a speech Tuesday by Russia's special climate representative, and a small group of Ukrainian and Polish activists briefly disrupting a Russian side event.