CHINA Ministry calls for talks with US to avert trade war

Ministry calls for talks with US to avert trade war

China's foreign ministry said on Thursday that a trade war is not in anyone's interests and that China and the US can use talks to resolve disputes. 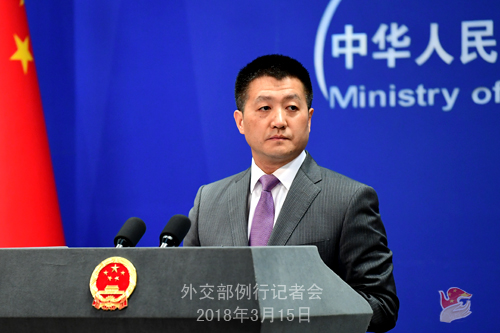 At a regular press conference in Beijing, Foreign Ministry spokesperson Lu Kang said history showed that trade wars are in nobody's interests, but that China would protect its legitimate rights if "something happens that we don't want to see."

"We believe that China and the US can use friendly consultations to resolve our disputes. We have the good faith to do it this way," Lu said.

The Trump administration is pressing China to cut its trade surplus with the US by $100 billion, Reuters reported on Thursday, citing a White House clarification of a tweet last week from US President Donald Trump.

On March 7, Trump tweeted that China had been asked to develop a plan to reduce its trade imbalance with the US by $1 billion, but a White House spokesperson said Trump had meant to say $100 billion, said Reuters.

China reported its 2017 trade surplus with the US at $276 billion, which was about two-thirds of its total global surplus of $422.5 billion.

The White House spokesperson declined to provide details about how the administration would like China to accomplish the surplus-cutting goal - whether through increased purchases of US products such as soybeans or aircraft, or whether it wants China to make major changes to its industrial policies, cut subsidies to State-owned enterprises or further reduce steel and aluminum capacity.