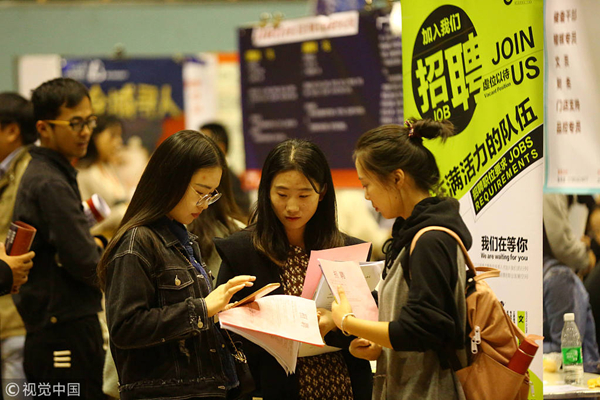 The urban jobless rate was kept low at 3.62 percent as the Chinese economy maintained a steady pace, ministry spokesman Lu Aihong said at a regular news conference in Beijing.

China exceeded last year's job creation target. In March, it set the 2019 target at 11 million, but by the end of November around 12.79 million new urban jobs had already been created.

The job figures have been bolstered by a host of factors, including the continuous expansion of the service sector and the central government's efforts to cut labor costs, said Zhang Ying, head of the ministry's division of employment promotion.

She said steady economic activity was behind the encouraging figures, and the rapidly expanding services sector and new business models had helped to create job opportunities.

Employment also grew thanks to a number of policies aimed at reducing labor costs, including lowering social security contributions and subsidizing employers who refrained from shedding staff or those who hired laid-off workers, she added.

Figures from the ministry show that covering the costs of employees' social security coverage accounted for 23.45 percent of company payrolls last year, 7.05 percentage points less than in 2015.

Nie Mingjun, who oversees pension funds at the ministry, said China has lowered the combined rate six times since 2015, and last year's reduction was the largest. He said the reduction in social security fees since 2015 had reached almost 1 trillion yuan ($145.2 billion).

Nie said the impact of relieving this burden had been significant for businesses, regardless of their size.

"Many employers said the rate reduction had effectively lowered their labor costs, and the money saved in turn has created further momentum for innovation, or some of it had become financial benefits given to employees, which ultimately enhanced the company's appeal," he added.

Nie said the lowered rate also created a virtuous cycle for pension funds, which had run short of funds in some rapidly aging areas due to the lack of contributors.

He said lower labor costs had invigorated businesses, enabling them to buy insurance for more employees, which meant more people contributed to the fund.

The ministry said the national pension fund's balance had reached over 5 trillion yuan, with 319.9 billion yuan received last year, which Nie said was not bad considering the drop in the contribution rate and the increasing benefits that pensioners collected.