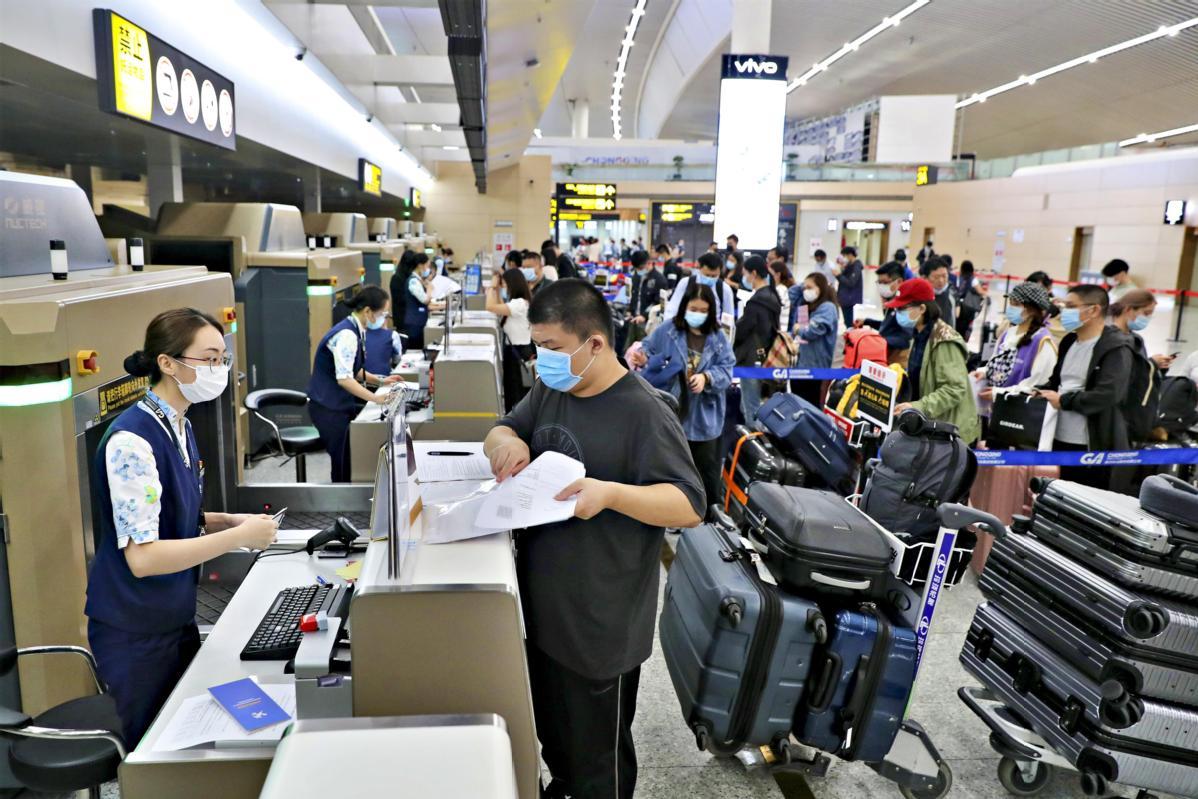 About 10,000 Chinese nationals are flying back from overseas every day

China arranged 351 chartered flights this year to bring more than 73,000 citizens home from 92 countries, a Chinese diplomat said on Thursday.

Cui Aimin, director-general of the Foreign Ministry's department of consular affairs, revealed the figure while briefing reporters about consular protection and services this year in the context of the COVID-19 pandemic.

Some of the 73,000 brought home were minors studying overseas and others forced to leave school in the summer, people who were sick or pregnant and those who had gone abroad to visit relatives or travel before the pandemic. They also included employees of businesses who were in urgent need of repatriation due to the completion of overseas projects or the suspension of operations, Cui said.

China also helped the governments of the Hong Kong and Macao special administrative regions bring back 195 people from the Diamond Princess cruise ship, he said.

"This repatriation operation is different from previous evacuations of overseas Chinese citizens," Cui said. "It is to bring overseas compatriots in difficulties and in urgent need back to China under necessary protection and with strict measures to control the spread of the coronavirus."

Noting that commercial flights remain the major channel for the return of citizens, he said Chinese embassies and consulates have urged overseas governments and airlines to keep "corridors in the air" open to allow Chinese citizens to return home.

He cited government statistics showing that about 10,000 Chinese nationals have taken flights back to China every day recently.

Cui said Chinese embassies and consulates have coordinated with government departments and enterprises to collect a large number of pandemic prevention materials and medicines for distribution to overseas Chinese. The country has distributed nearly 50 million masks, 6 million pairs of gloves, 700,000 boxes of lianhua qingwen, a traditional Chinese medicine, and other anti-pandemic materials to more than 5 million overseas compatriots in over 100 countries.

During the pandemic, he said, the ministry's 12308 consular helpline has received over 740,000 calls, including 3,000 a day since April, three times the number in the same period last year.

Ahead of the Spring Festival holiday in February, Cui suggested citizens pay more attention to travel alerts issued by the ministry and Chinese embassies and consulates and reduce nonessential trips.

He urged Chinese nationals abroad to avoid long-distance travel, especially across borders, and said those in China should avoid travel abroad to minimize the risk of being infected or stranded during their trips.