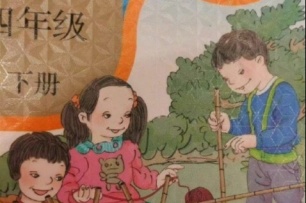 The Ministry of Education has asked the publisher of primary school math textbooks to redo the illustrations after public outcry for being too ugly and inappropriate.

The ministry has asked the People's Education Press to carry out prompt ramification measures and make sure new textbooks are available for students before the start of autumn semester in September, it said in a release on Saturday.

The ministry will conduct a comprehensive evaluation on all textbooks used by primary and secondary schools nationwide, especially on the content and illustrations.

The evaluation aims to make sure they adhere to right political direction and values orientation, promote traditional Chinese culture and conform to public aesthetic taste, and any problems found will be corrected immediately, the release said.

The ministry welcomes the public to send suggestions on the textbooks, which will be taken into account in a timely manner, it added.

The illustrations of math textbooks have been trending on different social media platforms since Thursday. Many netizens found them ugly and offensive and lacking childish innocence because the students in the illustration have strange facial expressions and smile.

Some are also wearing strange clothes, have tattoos, and are making inappropriate gestures.

The People's Education Press has expressed deep apologies and remorse for the illustrations.

The publisher said it has set up a work group to re-do the illustrations, which will be completed before Sept 1, it said in a statement on Saturday.

It will select new design teams to redo the illustration on math textbooks used by primary school students, taking suggestions from the public, especially teachers, students and parents, the statement said.

It will conduct evaluation on other textbooks it publishes and make correction right away for possible problems, the statement added.

The People's Education Press, founded in 1950, is under the administration of the Ministry of Education and focuses on compiling and publishing textbooks for primary and secondary school students, according to its website.

The textbooks, which are used by primary school students, were vetted by authorities in 2012 and 2013 and are the work of the Wu Yong Design Studio.

Wu himself graduated from the Academy of Arts and Design at Tsinghua University in 1988. He has worked at China Youth Press and been a professor at Shantou University's Cheung Kong School of Art & Design.