China's pork production is expected to recover gradually and return to normal by 2021, according to an action plan released on Friday by the Ministry of Agriculture and Rural Affairs. 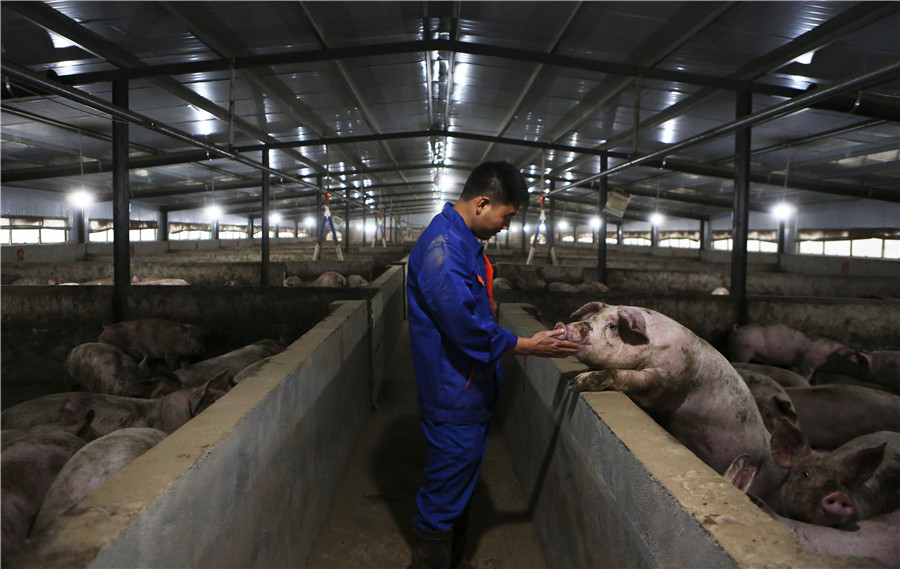 An employee conducts checks on pigs at a breeding facility in Deyang, Sichuan province. (Photo: Xinhua)

The plan said agricultural authorities across China must consider stabilizing pork production, with guaranteeing supply a key task, and try every means to restore pork production as quickly as possible.

The target is to ensure the stock of pigs stops declining and starts increasing before the end of the year, and ensure a generally stable supply of pork during the New Year's Day holiday on Jan 1, the seven-day Spring Festival holiday in late January, and the annual sessions of China's top legislative and advisory bodies in March, the plan said.

The ministry urged local authorities to provide financial support as soon as possible, guide pig farmers to restore production, and honor subsidies offered to pig farmers who have slaughtered pigs to prevent and control the swine fever.

In addition to providing assistance to sizable farms, authorities should also help small farmers to restore production, and encourage them to intensify cooperation with big companies to replenish stocks, the plan said.

Developers of farms able to produce more than 5,000 pigs a year may be exempt from inspection by environmental protection authorities before building the farms, as long as they have pledged to protect the environment, the plan said.

Meanwhile, the authorities should report suspicious African swine fever outbreaks to the ministry as soon as possible, and hot lines will be established to receive whistleblowing information from the public regarding outbreaks, with whistleblowers to be rewarded if the information is verified, the plan said.

Although pork production in China has seen signs of recovery as a result of a favorable market and supporting policies, the ministry said many challenges remain in restoring production to meet demand from consumers, and strenuous efforts are needed.

Pork production in China has been seriously affected by African swine fever outbreaks since August last year, resulting in a sharp decline in the stock of pigs and this year's production of China's favorite meat.

Various central government departments, including the Ministry of Agriculture and Rural Affairs and the National Development of Reform Commission, have released policies to encourage the production of pork since early this year, including providing subsidies to sizable pig farms and loosening registration restrictions for pig-raising companies.

All 31 provinces, autonomous regions and municipalities on the Chinese mainland have also released guidelines to support pork production.

In October, the stock of breeding sows in China saw the first month-on-month increase since April last year, and the decline in the stock of other pigs was further curbed, the ministry said.

Zhu Zengyong, a pork industry analyst at the Chinese Academy of Agricultural Sciences, said with supporting policies from the government and relatively high pork prices, pig farmers will be encouraged to continue replenishing stocks.

"Some big producers of pigs started to replenish stocks in the first half of the year, driven by profit prospects," he said. "African swine fever will be less active in winter, which will be a favorable condition for restoration of production."

He predicted the stock of pigs in China will start to recover early next year, but said pork production is lagging behind and may not recover before the middle of next year.