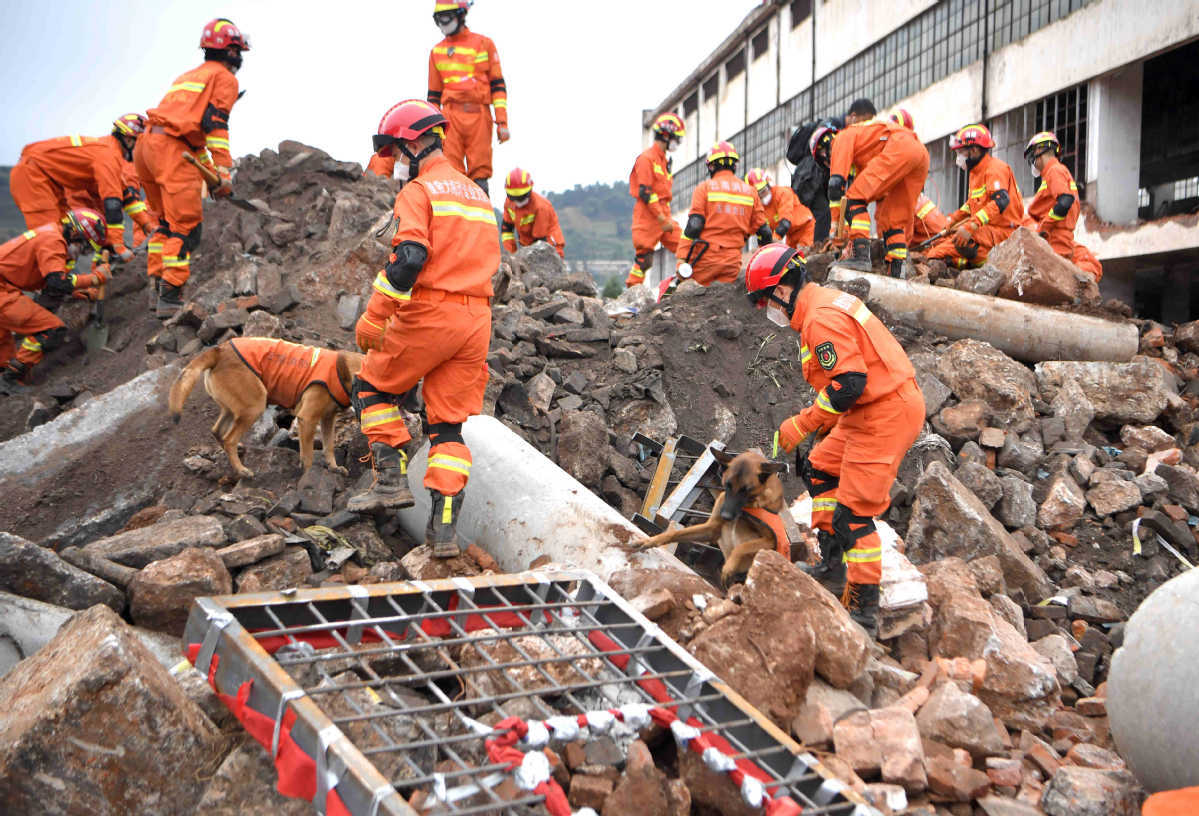 Rescuers look for "trapped residents" during an exercise in Tonghai, Yunnan province, on Wednesday. The exercise mimics a scenario in which an earthquake damaged roads and triggered a landslide. (Photo: China Daily)

The Ministry of Emergency Management plans to recruit more college-educated members for its fire and rescue team as part of efforts to enhance the country's disaster relief capabilities, officials said.

The ministry had planned to recruit 3,000 college graduates this year. Due to the impact of the COVID-19 pandemic and inadequate publicity, however, many graduates failed to participate in the national civil service exam interviews-originally scheduled earlier this year and a prerequisite for qualification. The ministry only managed to recruit just over 900 graduates for the team, Zhang Fusheng, its deputy head of fire services, told a news conference organized by the State Council Information Office on Thursday.

Zhang said the team plans to recruit another 2,800 fresh university graduates next year to meet a serious need for replenishment of talent. This year, over 33,000 graduates are expected to participate in the national civil service exam-the written portion of which will be held on Nov 29-in hopes of landing a spot on the team.

The ministry has introduced a series of policies to attract university graduates to the team, Zhang said.

The upper age limit for candidates can be raised to 26 from 24 if they have a bachelor's degree or higher. With two years' front-line experience, such graduates will be qualified to take part in a special exam organized by the ministry. If they pass it, they will be promoted to officers, he said.

Last year, 185 graduates were promoted, and the ministry plans to promote another 200 in the coming year, he said.

The ministry has also intensified training for rescuers. Over 1,700 firefighters were sent to the China Fire and Rescue Institute for training last year. They will be promoted to officers after they graduate, Zhang said.

He added that over 217,000 firefighters also took part in various rescue training sessions last year, including ones dealing with earthquakes and disasters on mountains and in water.

Chinese firefighters-once part of the armed forest police units responsible for forest fire control or under public security authorities for other fire disasters-were previously recruited under the Military Service Law and managed as soldiers. They were shifted to the jurisdiction of the Ministry of Emergency Management after it was established in March 2018.

The new ministry was tasked with integrating China's scattered disaster-relief resources to cope with frequent natural disasters and accidents.

On Nov 9 that year, President Xi Jinping conferred the national fire and rescue team flag to the new team, ordering members to be loyal to the Party, disciplined and devoted to the people.

The ministry said the team has participated in 2.6 million rescue missions since it was established and has saved and evacuated more than 1.2 million people involved in disasters.