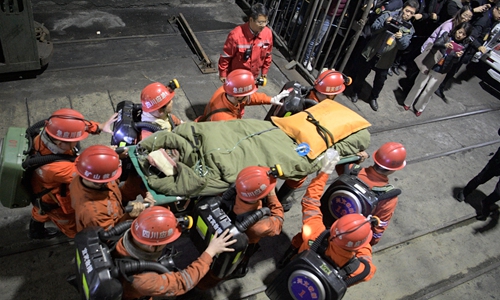 Rescue staff hold a stretch, on which lies one of the 13 surviving miners who have being trapped for more than 80 hours in a colliery accident in Southwest China's Sichuan Province on Wednesday. (Photo: Global Times)

All of the 13 surviving miners were rescued after being trapped for more than 80 hours in a colliery accident in Southwest China's Sichuan Province, local authorities said on Wednesday. Many people hailed the rescue operation as a "miracle."

The miners showed stable vital signs, with each of them to be assigned a medical group composed of elite doctors and experts, the Shanghai-based news site thepaper.cn reported on Wednesday.

Many netizens hailed the rescue operation as a "miracle." "Tip my hat off to the rescue teams and medical staff who did a great job, which is unbelievable. Nothing is more important than life," said an internet user on Sina Weibo.

Trapped by a mine flood, the miners were found staying on an elevated part of the mine's tunnel, a place with sufficient air that protected them from drowning, a rescuer told the thepaper.cn.

Sichuan emergency management authorities released an emergence notice on Monday, urging its subsidiaries to learn from the case and conduct safety inspections throughout the province until January next year.

Du Bingjian, an expert from China's Emergency and Rescue Command Center, told the Global Times that the timely arrival and the correct rescue measures were key to the rescue operation.

Du added that the Chinese government has stressed the importance of worker's safety in recent years, as almost every province has set up at least one national-level emergency and rescue team.

China's National Coal Mine Safety Administration issued a notice to carry out a three-month inspection in November to protect people and crack down on illegal mine factories as the Spring Festival approaches.

According to the administration's data, China has made great progress in coal mine safety in the past 20 years. By the end of November 2018, 295 people had died in coal mine accidents nationwide that year, a 12.7 percent drop from the previous year.

The Sichuan government and the Ministry of Emergency Management reacted to the accident quickly. They rushed 13 rescue teams to the spot, together with 14 ambulances and 62 medical care personnel, Sichuan Daily reported.

Liu Guihua, 56, the first victim who was saved in the accident, is a veteran coal miner with 36 years of working experiences. Liu's wife, holding flowers waiting at a local hospital, told Sichuan Daily that though worried, the family never ever lost faith.

Media reported that the mine called Shanmushu was investigated for excessive mashgas concentrations in April, and some responsible personnel were removed from their posts.