YIBIN, Sichuan Province, Dec. 19 (Xinhua) - At around 1 a.m. Wednesday, as rescuers waded forward in waist-deep water in an underground tunnel, they heard sounds of tapping on a steel pipe. 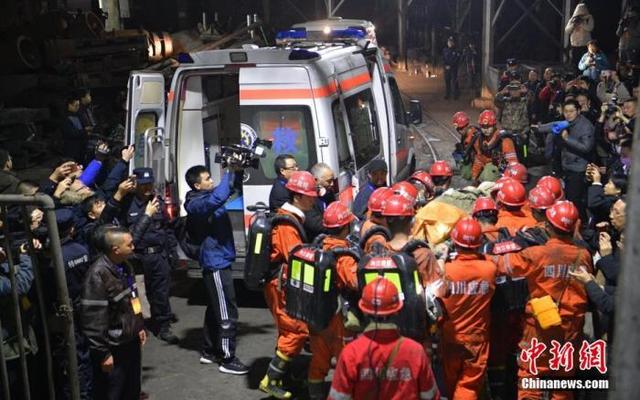 Over three days after a flooding accident occurred at 3:26 p.m. on Saturday in Shanmushu mine in the southwestern Chinese city of Yibin, it was the first sign that the trapped miners might still be alive.

Local authorities had said 347 miners were working underground when the accident happened. A total of 329 escaped, five were killed and 13 were still trapped.

"Anybody there?" rescuers immediately shouted toward the end of the tunnel. Before long, they heard the faint tapping sounds again.

To their further delight, rescuers later found a floating plastic bag containing a paper note that was wrapped around a long thin plastic tube. Mao Qigang, one of the rescuers, grabbed the bag and unwrapped it.

"We read the note carefully. On it was scribbled: 'No inflow of water.'" Mao recalled. To rescuers, it meant that the trapped miners were calling for help while doing their best to survive.

At 3:00 a.m., a trapped miner named Liu Guihua first walked out of the accident site about 313 meters underground and met the rescue teams. Hugging the rescuers excitedly, Liu said, "There are 12 people still trapped. Go rescue them."

"Rest assured, we will get you all out of here," Mao said. By attaching life buoys to boat-shaped stretchers, rescuers were able to ferry trapped miners out of the tunnel one by one.

At 7:56 a.m. Wednesday, after being trapped for over 80 hours, 13 miners were lifted out of the mine. The crowd waiting at the site applauded and people at the rescue command center cheered.

"The quick response greatly improved the chances of survival for the miners," said Hou Jianming, head of the emergency response center of Sichuan's provincial emergency management bureau. "We planned two rescue routes for the operations and also considered other means of rescue including drilling."

Local authorities said 13 rescue teams with 251 people joined the rescue operations. Fourteen ambulances and 62 staff were sent to the site.

"I have taken part in over 100 rescue operations in coal mine accidents. This one is truly a miracle," said Chen Hua, the leader of a rescue team from Yibin.

First-aid workers also commended the strong will of the miners to survive.

"Trapped in a tunnel, they drank water dripping from above and shared among them the little food they had," said Yi Zhizhang, president of a local hospital. "They were all very resilient."