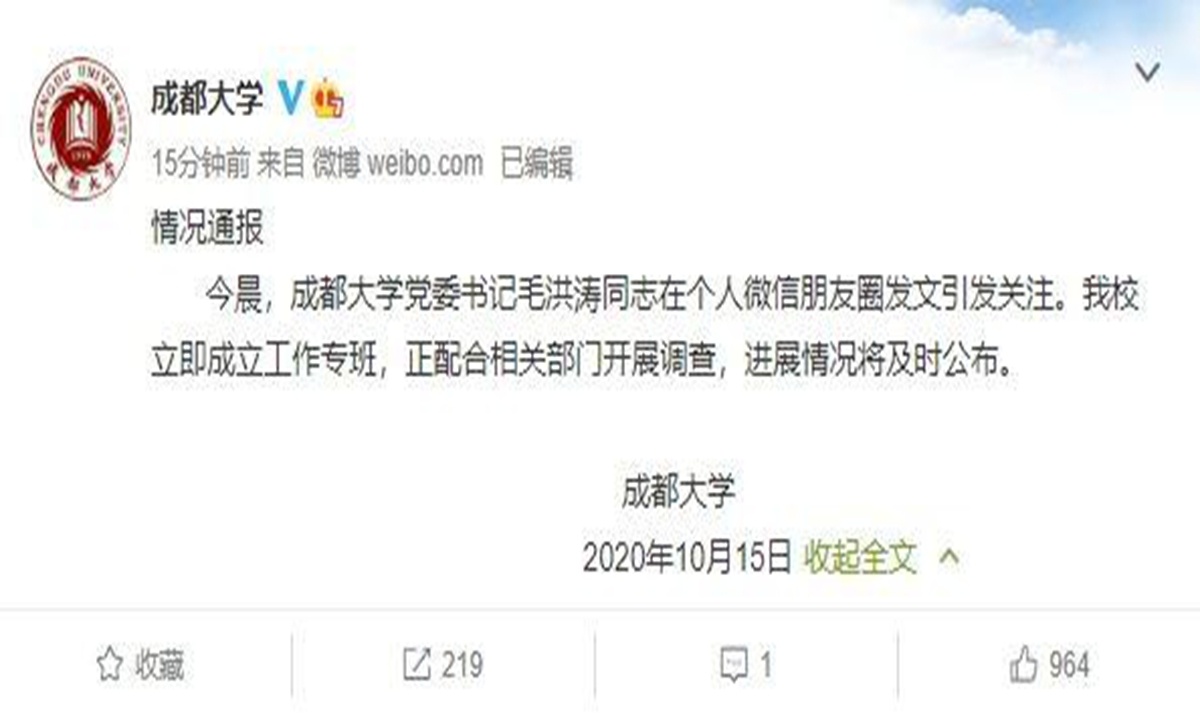 A screenshot of an official statement from Chengdu University (Photo: Web)

The Chengdu University Party chief who was reportedly missing on Thursday was found dead after drowning, Chengdu police announced on Friday.

A male body was found in the Wenjiang section of the Jiang'an river in Chengdu at 6 am on Friday, with police later confirming the body was of Mao Hongtao, Party chief of Chengdu University. The police said they believe that he died after drowning and the case is still under investigation.

Born in 1970, Mao was formerly the vice mayor of Meishan, a city about 80 kilometers from Chengdu, capital city of Southwest China's Sichuan Province. As a high-level academic who majored in accounting, Mao was also granted a special allowance from the State Council, China's cabinet, according to his resume on the university's website. By citing a post shared on his WeChat moments, local media reported that Mao might have come under tremendous pressure at work, and claimed that he would "end everything," which sparked speculation online over the reason why he has gone missing.

Some online posts also asked if there were some conflicts among university leaders, pointing out that the university has seen frequent reshuffles in its Party chief position, hinting at problematic management and leadership.

On Thursday morning, posts published by Mao attracted public attention, and "we immediately set up a special working group cooperating with the relevant authorities in the investigation," the university said in a post published on Thursday afternoon on Sina Weibo, adding that it would release updates in a timely manner.

News of the incident of the missing head of the university had been viewed more than 100 million times on Weibo as of late afternoon on Thursday.