On June 25, security guards stopped Zhang Ran and her guide dog, Shaguo, from entering a building in Beijing, even though Zhang had been invited to take part in a philanthropic activity for visually impaired children in the block. 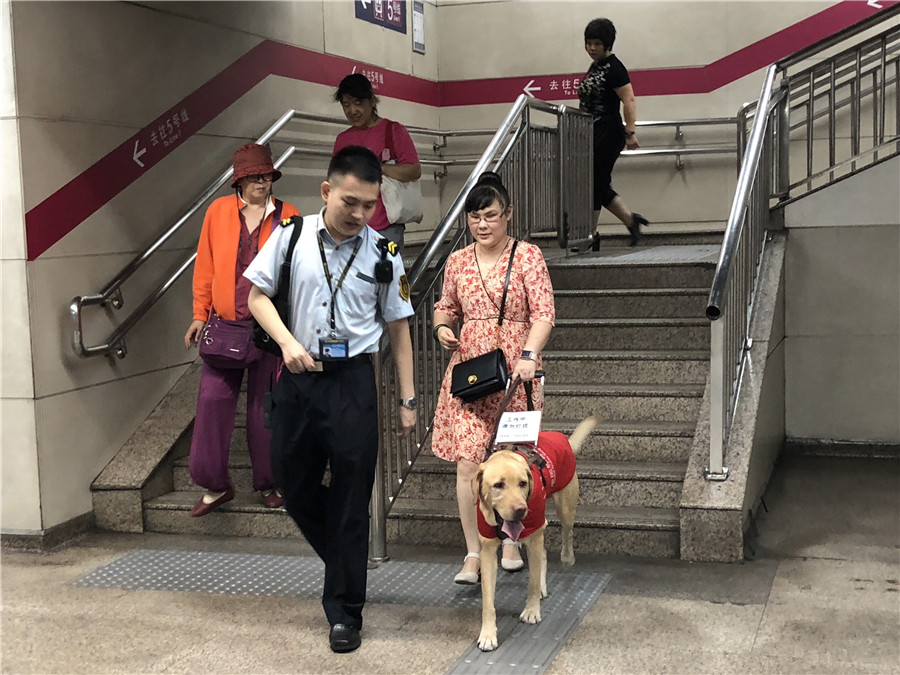 "It was ridiculous－they invited me to the charity event, but stopped my guide dog at the door," the 30-year-old said.

Since then, they have faced unexpected situations as a result of misunderstandings, even though ordinary activities－such as guiding Zhang to subway platforms or the railway station－are a piece of cake for Shaguo.

"Not long ago, Shaguo led me to the subway station and located the down escalator. However, the moment I stepped onto the escalator, a subway employee pulled me back while Shaguo was already heading downward. I struggled to free myself and I had to let go of Shaguo's leash so she could keep moving," Zhang recalled.

She said the worker rudely ordered them to use the elevator rather than the escalator, which upset her because the man didn't realize that although Shaguo can locate an escalator by its sound, she is unable to identify elevator doors.

"The constant misunderstandings mean I always tell people that Shaguo and I can do things like this (use an escalator), but they don't believe me," she said. "Trust is more important than any other form of help."

Li Weihong, chairman of the China Association for the Blind, said: "Guide dogs are seeing eyes for the blind. Saying no to a guide dog is saying no to a blind person－no matter if it's on purpose or not.

"Public acceptance of guide dogs is another major problem. The law related to the protection of the disabled (which came into force in 2008), allows blind people to bring guide dogs with them on public transportation, but we have had to make compromises and hold back on amendments to some regulations, such as guide dogs having to wear muzzles on long journeys, for example. There's still a lot of work to do to ensure that guide dogs are accepted by the public."

Li said the association's proposal for a new national standard on guide dog training was approved by the Standardization Administration in May and will be implemented in December. "We want to get government support by drafting these standards," he said.

There is growing optimism about the progress of training programs because training centers have been established in Nanjing, Jiangsu province, Guangzhou, Guangdong province, and Xi'an, Shaanxi province, to provide more guide dogs nationwide, he added.