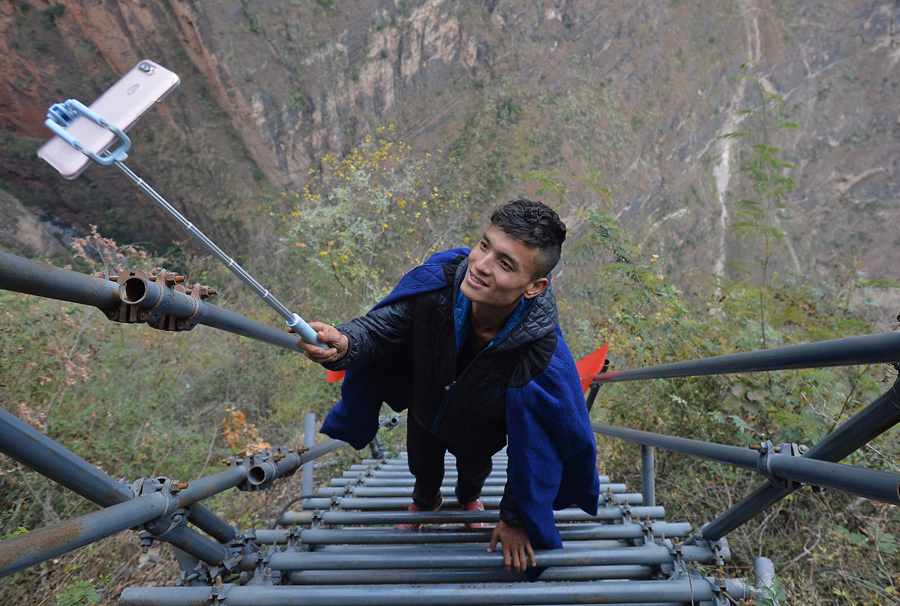 Yang Yang, of the Yi ethnic group, live-broadcasts climbing the steel ladder at Atuleer, a village in Zhaojue county, in the Liangshan Yi autonomous prefecture, in December. [Photo by Wang Qin/For China Daily]

Great changes have taken place in a land-locked Yi village in Sichuan province thanks to mobile communication.

Young villagers give live broadcasts on their lifestyle to earn money and sell local specialties online.

Atuleer, a village in Zhaojue county, in the Liangshan Yi autonomous prefecture, that lies atop a cliff more than 1,400 meters above sea level, was famous for relying on an 800-meter zigzag network of rattan ladders to link with the outside world.

The rattan structure－17 small ladders tied together without railings or other safety features－had been used by villagers for years. They relied on it to reach the nearest market several kilometers away once a week to sell local specialties like walnuts and to buy necessities.

Photos published by a Beijing newspaper in May 2016 of pupils climbing the cliff on the rattan ladders sparked a public outcry and prompted Liangshan officials to address the issue.

The villagers, who did not want to leave their time-honored habitat, could not be relocated so decision-makers in Liangshan, which has China's largest Yi population and is one of Sichuan's least developed areas, promised to replace the rattan ladders with steel.

Construction of a steel ladder with handrails was completed on November 19, 2016, at a cost of 1 million yuan ($153,480)－the Liangshan and Zhaojue governments splitting the cost.

It took three hours to return home via the rattan structure, but the steel ladder has reduced that journey by an hour, said Er Dijiang, head of Atuleer.

In November 2016, China Telecom decided to invest more than 1.5 million yuan to cover the village with mobile communication.

More than 40 workers were involved in the challenging task, carrying wires and equipment for the installation of mobile communication on their shoulders to the village using the steel ladder, said Zheng Chengyu, president of China Telecom's Sichuan branch.

Through the accessibility of mobile communication in June, La Bo, a 24-year-old Yi villager started live-broadcasting his stunts of jumping from one boulder to another in the mountain and crossing a suspension bridge over running water in a river as well as holding a sheep in his arms.

His friend and fellow villager Yang Bo started live broadcasts dedicated to local specialties such as walnuts and honey in late 2017. With some 50,000 fans, he can sell 25 kilograms of honey within a week, said Song Ming, an information officer in the Liangshan prefecture government.