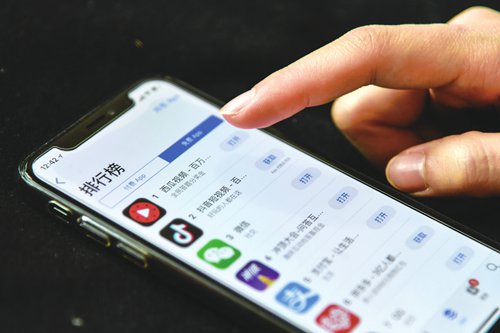 A person points at ixigua.com's App on a smartphone screen on Wednesday in Beijing. Photo: IC

Live game shows on smartphones are gaining popularity in China, with an increasing number of apps launched since the end of 2017 that are attracting millions of Chinese users. Experts said that this is a new internet business pattern driven by a large amount of capital to attract a user base and network inflows, but it needs to be regulated.After the live game show app Chongdingdahui was released at the end of 2017, more platforms followed suit, including the Zhishichaoren app that was launched on January 4 and the Millionaire Hero live game show powered by ixigua.com app unveiled on January 6.As of Monday, ixigua.com was No.2 among the App Store's free top 10 games, Chongdingdahui ranked No.10 and Zhishichaoren No.25."Most of my colleagues and friends are playing live game shows on their smartphones every day. One can have fun while winning money," a 20-something white-collar worker named Mao Xin in Beijing told the Global Times on Monday. The Global Times found 10 game sessions are hosted live at specific times daily on Millionaire Hero, with thousands of players competing to win real money. Players get 12 multiple choice questions and only have 10 seconds to answer each one.Players who make it to the end can split the total prize, which ranges from 500,000 yuan ($77,880) to 5 million yuan."I was introduced to the game several days ago when my friend invited me to sign up at ixigua.com. By doing that, my friend earned an extra 'life' in the next round of the game," Mao said. "I split 1 million yuan Sunday night with about 100,000 other players who answered 12 questions correctly on the platform of Chongdingdahui and got 10 yuan," a player surnamed Chen told the Global Times. Chen said that he could transfer the prize money to his bank card easily."Most players are young people, ranging from primary school students to white-collar workers, who are likely to participate in this new form of entertainment," Zhang Yi, CEO of iiMedia Research, told the Global Times on Monday, "Also, earning money is attractive to them."The trend is being mainly driven by capital as those platforms have secured plenty of money, Zhang said.Chinese online lender Qudian Inc sponsored Zhishichaoren with 100 million yuan on January 9. On the same day, leading group-purchasing site meituan.com tied up with Baiwanyingjia, which is backed by live-streaming platform Huajiao, according to media reports.The prize money is provided by investment and the platforms themselves initially, while advertisement revenue will provide the prize money after the platforms have accumulated big user bases, Zhang said. Li Yiyang, an industry analyst with iResearch, also said that advertising is a vital source of gains for the sector.Having live game shows on smartphones is a new business model that could help attract users cheaply, Zhang said, because it costs only 0.1 yuan to 0.2 yuan to attract one active user in this way.The user activity rate of the Chongdingdahui app has remained above 80 percent since it was released at the end of 2017, according to mobile internet service provider getui.com.Li told the Global Times on Monday that "although an increasing number of platforms are following the trend, only those that can attract more network flows and large user bases will survive the intensifying competition."Some problems are also appearing in the fast-growing industry, and government regulations and industry guidance are needed, experts said.During a live episode of a game show on Huajiao on Saturday, the platform listed Hong Kong and Taiwan as "countries." Huajiao immediately apologized for this mistake on its Sina Weibo account later the same day after the Cyberspace Office of Beijing contacted the platform.Other issues also persist - users may cheat with search engines and buy more "lives" on shopping platforms such as taobao.com. Some platforms reportedly falsify the number of online players and leak questions beforehand, news site bjnews.com.cn reported Monday.Given these issues, government regulations and industry guidance should be introduced in the sector in a timely manner, Zhang said, adding that such platforms are expected to disseminate sound content and have strict requirements for their employees if they want to continue to develop.