Endless practice with discarded materials until her arms hurt too much to lift the tools was how Xue Ying spent after-work hours after starting her career as an aviation technician in December 1992. 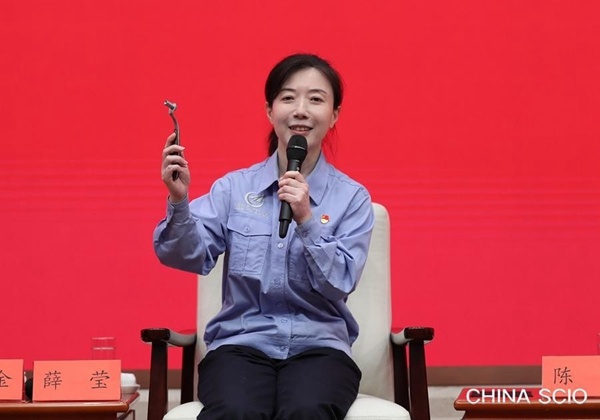 Xue Ying, a team leader of the international aircraft parts factory at AVIC Xi'an Aircraft Industry Group Company Ltd., attends a group interview held by the Publicity Department of the Central Committee of the Communist Party of China in Beijing on April 29, 2021. (Photo: China SCIO)

She said nobody had asked her to do so; it was merely her aspiration and persistence. Back then, she noticed a marked difference in appearance and precision between the products of Boeing and those used by Chinese aircraft, and aspired to build world-class aircraft.

It was ambitious indeed, but Xue saw her endeavor paying off over the years, though it did not come easily.

The team Xue was in at a factory of AVIC Xi'an Aircraft Industry Group Company Ltd. was in charge of assembling the detachable leading edge of the vertical fin, or more specifically, fixing four pieces of aluminum skin manually. Due to high precision requirements, it allowed little room for faults.

Xue became the team leader in 2000 by virtue of her excellent skills gained through diligent practice, but challenges also came along.

In the same year, Boeing ordered the leading edges of vertical fins for its 737-700 aircraft from the company, requiring no more than 10 scratches throughout the skin of the whole aircraft. However, the number of scratches on the aircraft of Xue's company was mostly over 100 at that time.

Xue said that, despite the part's high quality, the skin with metal glows was more delicate than human skin, and one could probably leave a scratch on it with fingernails. A scratch as deep as the diameter of a hair would ruin such a piece of skin, which was worth over 10,000 yuan (US$1,561).

When other workers were at a loss about what to do, Xue came up with an innovative protection method. She volunteered to make trials in her after-work time when many others were unwilling to work extra time.

"Personal losses seem to have never been taken into my account," she said. "I merely think a CPC member should be different, should try things that others are unwilling to do, and should share the experience after achieving success."

Over three months, Xue and her team improved various tools, took multiple protection measures, and ran many tests, eventually meeting the requirement and lifting the production efficiency by 25%.

In addition, Boeing also required that after fixing the 7.2-meter-long and 60-kilogram skin with a rivet on one end, they should press the other end with a thumb in a force of merely less than five pounds to fit it perfectly tight with over 300 holes on the fin. This time again, Xue fulfilled the task together with the research team she set up through 40 days and nights of experiments, winning praise from Boeing.

Working as a CPC member

In 2004, Xue became a CPC member at her work site. She talked about her aspiration for joining the Party at a group interview held by the Publicity Department of the CPC Central Committee in Beijing on April 29, two days before the International Workers' Day. She said, "I am one of those on the frontline of production. As a community-level Party member, I should do more solid work."

Over the years, she has indeed done lots of "solid work."

Together with her team, she made over 100 inventions and innovations to improve technologies and optimize production and operations. She also set up a model worker team in her company to tackle tough obstacles in technology and equipment, and organized discussions with model workers from other companies and industries. She has had five apprentices, all of whom have become the backbone on the production line, and she also helped poor university students to continue their education while calling on professional women to be confident and self-reliant.

Honors like national model worker also followed, but Xue remained humble as always. "I am a frontline technician at AVIC Xi'an Aircraft Industry Group Company Ltd., birthplace of China's large transport aircraft," she said of herself at the group interview.

Xue said she felt very motivated to see the country promoting the craftsmanship spirit and making outstanding craftsmen role models for society in the new era.

Xue, now 48, has been working in the aviation industry for nearly three decades.

Though doing the same thing for decades is perhaps a boring job to others, Xue said the dedication to the seemingly easy job makes the outcome completely different, directly affecting product quality and even affecting the image of "made in China."

Seeing that this year marks the 70th anniversary of China's aviation industry, she said she has witnessed the rise of the industry over the years.

"China has sent more aircraft into the sky, as China's aviation industry closes the gap with other aviation powers, shifting from 'made in China' to 'created in China.'"

"The industry has grown from zero to a modern one over the past seven decades," Xue said. "It demonstrates that only under the leadership of the CPC, can the country create such remarkable achievements, and that building China into an aviation power in the new era is no longer a distant dream, so we always believe that faith in mind helps to overcome challenges."