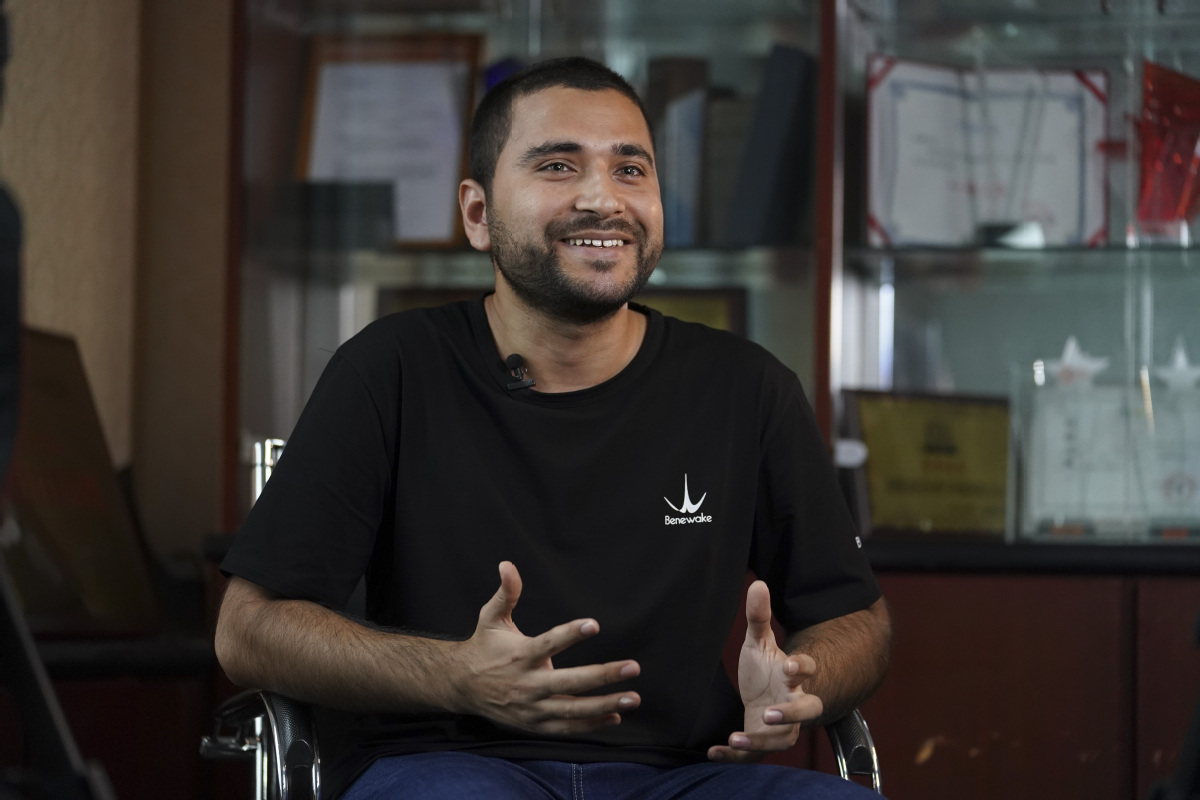 Muhammad Ibrahim talks about his work at Benewake in a meeting room at the company's office in Beijing. FENG YONGBIN/CHINA DAILY

Editor's note: When the planet's most populous country thrives, the rest of world does too, and friends from other lands have been willing to help. This series explores the contributions of foreigners to China's success.

Pakistani aerospace technology scientist Muhammad Ibrahim, 28, believes that China's push for a moderately prosperous society has opened the doors of opportunity for the rest of the world.

"It's well-known that China has set this goal," said Ibrahim, who works at the Beijing headquarters of Chinese technology company Benewake.

"In working to achieve it, the country has brought peace and stability to society and promoted technologies," he said, speaking of what is known as xiaokang shehui.

"Xiaokang society has made a major contribution to the development of China. We know that it was established by former leader Deng Xiaoping, who thought China would one day become a nation where people are moderately well-off－where economic prosperity is capable of moving most of the population into comfortable means."

As an international student who got his master's degree and found a job in his field after graduation, Ibrahim said he has benefited from Xiaokang society in his field, while also contributing to its progress.

As one of the few young scientists in Pakistan specializing in the design of quadcopters with stable balancing systems, Ibrahim came to China with the purpose of continuing his research with top scientists in the aerospace field.

Unlike many foreign students who come to China to study Asian cultures or learn Mandarin, Ibrahim sought out professors involved with research into the control of flying vehicles as he wanted to continue his master's degree.

"Once I found a professor at the Beijing Institute of Technology, I applied for his master's program in the aerospace engineering school," he said. "I wanted to combine electronics and principles of control theory, and apply them in aerial robotic systems."

After Ibrahim was accepted by BIT, he quit his job in Pakistan and came to Beijing to study.

Wang Jianan, Ibrahim's tutor and a professor at the school, said he selected the Pakistani from a list of five candidates because of his strong academic background.

"He has performed better than the average Chinese researcher in the field," Wang said. "I'm glad that he kept up his studies in LiDAR technology after graduation, and I hope that he will become the bridge between China and Pakistan in this field in future."

LiDAR is a method for measuring distance that works on the same principle as radar, but instead uses reflections of laser light.

Ibrahim followed his tutor's advice and took a job at the Chinese startup Benewake, which focuses on LiDAR research and development, manufacturing and technical engineering support.

He offers technical assistance to Benewake customers from 41 countries that includes selecting suitable products for their applications, troubleshooting and consulting.

"I act as a communication medium between overseas customers and the R&D teams in the company," he said.

"As a high-tech company, we are highly internationalized in terms of technologies and markets, which requires talent from all over the world," Li said.

He added that China has been transforming from an exporter to an importer of high-end talent, as the country becomes stronger economically and in scientific technology.

"To build China into a more prosperous country with the power of science and technology is what drives companies like ours to absorb overseas talent," he said.

Both Li and Ibrahim believe that the strong commerce and research environment in China offers great opportunities in the scientific field.

"The future of LiDAR is very bright because it's an emerging technology with many unique features," said Ibrahim, adding that it was compatible with different systems.

LiDAR applications produced by Benewake are used in many areas including smart railway transportation, smart airport operations, autonomous driving, drones, waste management and agriculture. The company is optimistic the technology will have a great impact on society in the future, Ibrahim said.

"I'm glad that I have participated in the development of this technology at a Chinese company, which will, for sure, make a difference in this industry in future," he said.

Ibrahim's ultimate goal is to open a LiDAR research center in Pakistan and work in collaboration with Chinese companies, which will have "great potential" for both countries.

Li said, "We are like explorers who opened up a new maritime navigation era in the 16th century, seeking treasure at first but discovering a new land by the end."