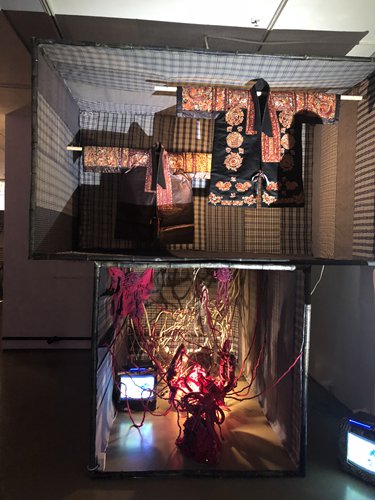 Ancient shamanistic religious practices and traditional silver accessories and embroidery are probably the first things many people think of when talking about China's Miao ethnic group. But what happens when these traditional cultural elements are woven into modern artworks? Looking to explore traditional Miao culture thorough the works of 21 modern art minds, the Where Worlds Weave: Modern Mores and Traditional Miao Values exhibition, organized by institutions including the Today Art Museum and Chen Yidan Foundation, kicked off at Beijing's Today Art Museum on Saturday.Featuring 112 artworks ranging from traditional hand-made Miao embroidery to installation works created by students from Beijing's Central Academy of Fine Arts (CAFA), the exhibition is a summary of sorts for a year-long experimental art project led by Wu Jian'an, a Chinese artist and associate professor at CAFA.From 2017 to 2018, Wu and a group of his students went on a series of field trips to Southwest China's Guizhou Province, where they met with local Miao craftsmen to learn more about Miao culture and art. Inspired by their experiences, the teacher and his students began to create artworks, which are now on display at the Beijing exhibition alongside a number of paintings and handicraft items made by local Miao people.Decorated with the Miao ethnic group's traditional dyed blue cloth and a number of bamboo poles transported all the way from Guizhou, the show's venue is purposely kept dim with the only light coming from small bulbs and torches set on or near the exhibits, a design decision that makes the entire exhibition feel like a mysterious cave.Visitors to the exhibition will first run into a little "forest" at the entrance that consists of 12 bizarrely-shaped statues that artist Zheng Jia created by braiding together thick strands of thread that had been woven using a traditional Miao weaving technique. Each of the statues represents an exotic plant or creature from the artist's imagination.Nearby, traditional Miao embroidery on loan from museums in Guizhou as well as a number of local craftsmen hang besides TV screens showing videos by Miao Yaosheng of the Miao Dragon Summoning Festival - a traditional three-year-long festival celebrated once every 13 years starting in late March. Aside from documentaries and local traditional handicrafts, almost all of the other exhibits provide visitors a surrealistic cultural experience. For instance, Feng Zixuan's installation work decorated with divine symbols uses sensors to play gong and drum sounds as visitors pass is a critique on how modern culture has impacted traditional Miao religious ceremonies. Moreover, a dozen of gothic ink paintings by Miao artist Shi Xiangyu and a rotating light installation by artist Jin Yang that constantly projects silhouettes of prehistoric monsters and shaman practitioners on the walls showcase the mysterious epic known as the Miao Ancient Song, which includes some of the ethnic group's oldest legends about how the world was made.Among all these, Big Body, an eight-meter-tall statue created by Wu using traditional Miao craftsmanship techniques, is definitely the highlight of the show. The work is a giant skull also made from braided cloth that sits on top of tall dark-colored bamboo poles, from which hang numerous handcrafted items. According to the artist, the statue represents "how ancient and modern cultures intertwine with each other and the idea that we are not separated from our ancestors.""Before meeting the Miao people, I pictured them, dressed their traditional clothing, as a mountain people worried about the fate of their traditional handicrafts and longing for someone to take their artifacts out from the mountains to the city - but this proved to be an illusion," Wu wrote in the introduction to the exhibition. "The Miao and us, as well as traditional and modern culture, are like parallel universes that have an ideal symbiotic relationship - which is to observe, understand and respect each other's culture," he wrote.The exhibition will run until October 9.