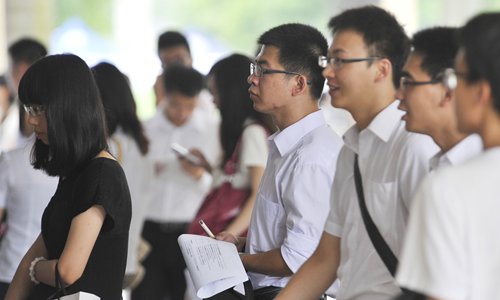 Cases of myopia among students in China are growing, increasingly affecting younger children and to a more serious extent. Short-wave blue light from screens has been found to be especially harmful to children.Myopia, or short-sightedness, is becoming the new norm for 30 percent of primary school students, 60 percent of junior high school students, and 80 percent of senior high school students in China. Typical modern habits may be a factor behind the increase in myopia. These include lack of outdoor activity, long hours of screen time, low levels of sunlight exposure and too many tasks that involve reading.According to the latest research report by the World Health Organization (WHO), there are currently about 1.4 billion people with myopia, nearly half of whom are based in China, roughly making up half of the population. The nearsightedness rate is 70 percent among Chinese high school and college students, the highest in the world. The rate is more than 30 percent in primary school students, while it is only 10 percent for their peers in the US, WHO's data showed. If no effective measures are taken, the number of people with myopia in China is estimated to exceed 700 million, with 40 million to 51.5 million to suffer from high myopia. China's Ministry of Education released a notice announcing a crackdown on online gaming, citing rising levels of myopia, on August 30, 2018. The move aimed to limit the number of new online video games, taking steps to restrict the time youngsters spend playing games.Myopia is rooted in modern lifestyles, and in addition to China, the trend is rising worldwide.As technology continues to evolve and lifestyles change, people find themselves becoming more dependent on their mobile devices, using them for everything from entertainment and booking appointments to placing orders and shopping. As a result, neglecting measures to protect the eyes and long screen times have led to a significant increase in myopia.Myopia does not only bring inconvenience to life, but can also become a public social problem. Good eyesight is part of the requirement for recruitment for certain professions such as pilots and firefighters. Experts suggest that lack of sunlight also leads to myopia, adding that children and adolescents should take part in more outdoor activities, keep a distance of 30 to 40 centimeters when using computers or mobile phones, give their eyes a break every 40 minutes, and have eyesight examinations every six months. If premature myopia occurs, the possibility of high myopia in the future will increase greatly, and high myopia will increase the risk of blindness, experts warned.