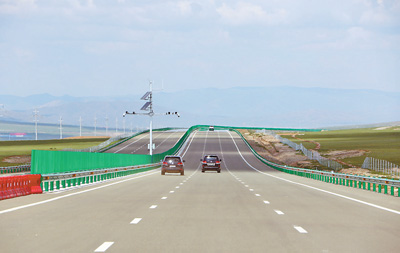 Mongolia's first highway built by a Chinese firm has opened to traffic, a major step towards the goal of Mongolia to expand transport and logistics networks to promote growth.

The two-way six-lane highway has a total length of 32.2 km and a designed speed of 80 km/h, according to China Tiesiju Civil Engineering Group which built the highway.

"It is a milestone in the history of bilateral ties and one of the major events celebrating the 70th anniversary of the establishment of diplomatic relations between China and Mongolia," Chinese Ambassador to Mongolia Xing Haiming said at the opening ceremony of the highway, held on July 5 in Sergelen soum of the central Mongolia's Tuv province.

"I believe that the highway is of great significance for enhancing the national image and reputation of Mongolia and the competitiveness of Ulan Bator city," Xing said, expressing hope that the highway will contribute to the social and economic development of Mongolia.

"I am confident that the highway which links Ulan Bator city and a new airport in Sergelen soum of Tuv province will give a greater impulse to boost Mongolia's tourism sector," the prime minister said, expressing his appreciation to the Chinese side for the strong support and assistance to Mongolia's development.

The project, with a total investment of over 140 million US dollars, started construction in 2016.

On the occasion of the anniversaries, the two countries have been intensifying their efforts to further strengthen bilateral ties and cooperation.