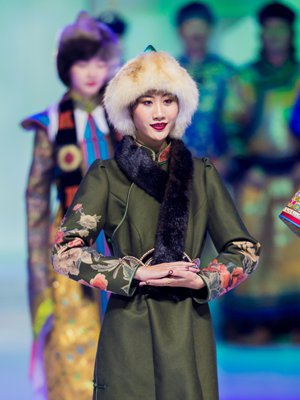 A clothing competition opened in North China's Inner Mongolia Autonomous Region on Monday with the aim to promote ethnic cultures. The five-day event is being held in Hohhot, the regional capital, and has drawn 149 domestic and foreign teams displaying ethnic Mongolian clothing.The contestants include herdsmen, entrepreneurs and researchers of ethnic cultures, according to Zhang Yujun, a tourism official."Of the competing groups presenting their traditional clothing, 142 come from Chinese provinces and regions, including Jilin, Xinjiang, Yunnan and Inner Mongolia," Zhang said. "Three groups are from Chinese ethnic groups, including the Oroqen and Daur, and four groups come from Russia and Mongolia."Prizes will be awarded to encourage innovation in the making of ethnic clothing. Seminars are being held to discuss future trends, protection and the market for ethnic clothing, Zhang said.Traditional Mongolian clothing has been around for more than 800 years. The regional government has issued regulations to help protect the clothing.