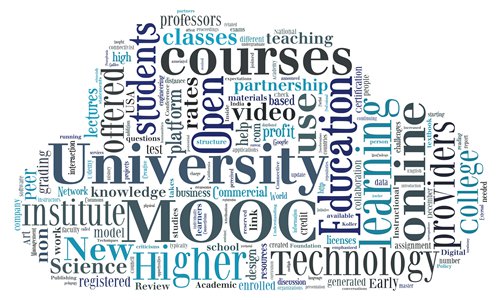 More than 15,000 online courses were offered as of August, with more than 1,000 courses available through Party theory learning app Xuexiqiangguo, the ministry said.

The MOOC courses were learned 270 million times with 80 million college students having earned credits for online courses, the ministry said.

"The rapid development of MOOC over the past two years is a result of continuous government support and growing domestic demand," Chu Zhaohui, a research fellow at the Beijing-based National Institute of Education Sciences, told the Global Times on Sunday.

The Chinese government announced more than 800 recommended online courses in January, ranging from physics and chemistry to analysis of the Chinese literary masterpiece The Dream of the Red Chamber.

The Education Ministry will conduct inspections on the courses regarding their operation, effects and updates. Courses that fail to meet the standards will be removed from the list.

The ministry also said in February that it would help train at least 10,000 science teachers through the MOOC platform.

"The MOOC has proved to be an assistant of enriching educational resources for individuals," said Xiong Bingqi, deputy director of the Shanghai-based 21st Century Education Research Institute.

"However, the available resources and teaching practice are two different things," Xiong told the Global Times.

"About 5-6 percent of students in the elite US universities finally complete their MOOC courses," he said.

China has launched a project for perfecting MOOC in practice in its western regions, which combines online courses with offline classroom teaching.

More than 52,000 teachers in western China universities have received training on the hybrid teaching approach. More than 8,000 MOOC courses are hybrid.

"It's more demanding for our teachers, but most beneficial to students," he said.

China launched the MOOC initiative in 2013 to help address the unbalanced distribution of education resources across the country and improve the overall quality of education.

The country now ranks top of the world in terms of scale in courses and learners, the China News Service reporte