CHINA More gatherings, celebrations will be held in Wuhan; West should get used to it

More gatherings, celebrations will be held in Wuhan; West should get used to it

More big gatherings like the New Year celebrations, sports events and live concerts will be staged in Wuhan, which was the hardest-hit city in China by COVID-19, during 2021, and the world had better get used to it, Wuhan residents said, calling on some Westerners to save their fellow countrymen following Chinese experiences rather than attacking Wuhan's gatherings with prejudice and hostility. 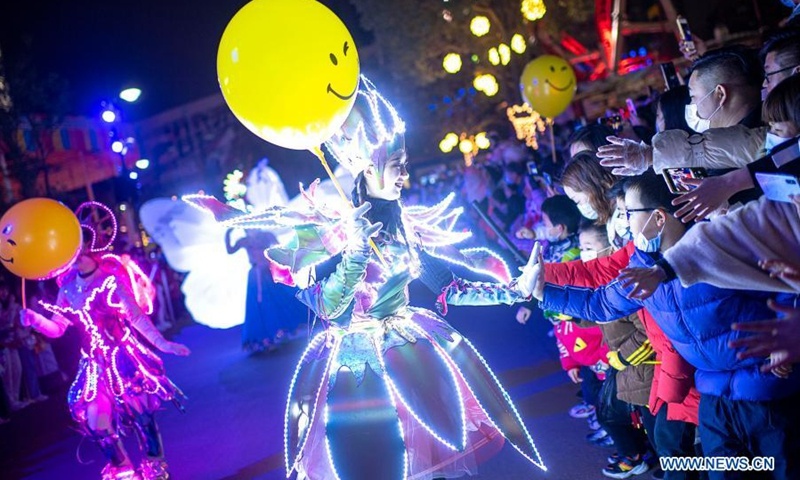 Performers interact with tourists at the Happy Valley Wuhan theme park in Wuhan, central China's Hubei Province, Jan. 1, 2021. People came to have fun and enjoy the view at the Happy Valley in Wuhan to greet the New Year on Friday. (Xinhua/Xiong Qi)

When large crowds of Wuhan residents took to streets and launched balloons to celebrate the arrival of 2021 on New Year's Eve, in sharp contrast with what Western media called a ghost town like Times Square with roads closed but no live audience, some Westerners with jealous eyes were sarcastic about Wuhan.

Telegraph columnist Allison Pearson asked, "How has Wuhan achieved this without a vaccine?" while posting the news about Wuhan residents' celebrations of the New Year in her tweet. She even questioned whether the footage of the celebrations was staged.

Her sarcasm apparently achieved the opposite effect, with some netizens listing Wuhan's effective epidemic prevention and control measures taken so far and blaming the British government for failing to be responsible.

A Twitter user posted, "They have a functioning Test, Trace and Isolate system and they wear masks. They stayed home when they were told to and they acted swiftly. We have an incompetent government whose main aim of dealing with the virus is to make their friends rich."

Some netizens also criticized Pearson for writing false epidemic prevention stories. She wrote in a story published in July that she refused to wear a mask, and then in November called on Britain to cancel lockdowns.

"So what did they do in China? Lockdowns, school closures, travel bans, mass testing, contact tracing, and masks. The sort of thing you opposed every step of the way this year (2020). Thanks a lot," a netizen named Sam Bowman posted. He made nine posts to refute what Pearson said in these stories.

Some Wuhan residents reached by the Global Times called the sarcastic comments "sour grapes," and said that their lives had returned to normal months ago, and more gatherings like the New Year celebration would be held in the city.

For many Wuhan residents who emerged from the shadow of the epidemic last April, when the 76-day-lockdown was lifted, it's quite normal to have such celebrations, Yang Zhanqiu, deputy director of the pathogen biology department at Wuhan University, told the Global Times on Sunday.

A massive swimming pool party attended by thousands of people in Wuhan in August 2020 shocked many people in Western countries who could not believe that Wuhan could recover so soon after being ravaged by the virus for months.

Wuhan was declared free of COVID-19 as last domestic patient left hospital in April. Although winter has set in, Wuhan is still safe, Yang said.

According to Wuhan media, about 30,000 customers visited 30 shopping malls in Hankou district in Wuhan on January 1, and residents all wear masks when attending public events.

Yang said that as a journalist, Pearson should better relate China's experience in controlling the epidemic to her countrymen and government to help the UK control the spread of the virus, instead of being jealous and hostile about Wuhan's celebration.