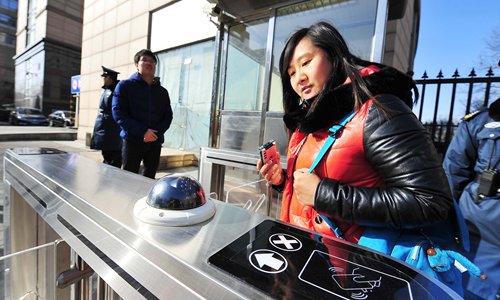 After the Spring Festival holiday, all 1,200 people who worked in a building in Beijing's Haidian district government found they could enter without showing any credentials, as their face was enough to get them inside the building.

A facial recognition system has been installed at the three entrances, and it only takes seconds for someone to pass through, Ma Xiaochuan, the system's project manager at the Beijing-based Zhonghai Investment company, told the Global Times on Tuesday.

The system can also alert security guards immediately when a stranger is spotted trying to enter, said Ma.

In addition to collecting and analyzing the entrance information, the system can also help prevent cases of people borrowing or faking credentials to intrude into the building, said the manager.

The move makes Haidian the first local government to use facial recognition technology in Beijing. It is one of the technologies used for e-governance, a trend that has been on the rise in recent years across China due to the rapid development of big data and artificial intelligence.

While the Internet was first used as an administrative tool in the early 2000s, the trend has only peaked in the past two years, after the technology matured and proved to be safe, Zhuang Deshui, deputy director of the Research Center for Government Integrity-Building at Peking University, told the Global Times on Tuesday.

In May 2017, the State Council, or China's cabinet, released a timetable for central and local governments to build e-governance platforms in a plan aimed at encouraging the use of Internet and smart technologies in government services.

By the end of August 2017, 29 provincial-level governments had launched online platforms for administrative services, said a statement from the cabinet.

Xiamen in Fujian Province also began using facial recognition in its medical system at the end of 2017. Doctors could only write prescriptions after logging in to the system, which could help prevent unqualified doctors prescribing medicines, the Xinhua News Agency reported.

In November 2017, urban management and traffic police in Hefei, East China's Anhui Province, jointly implemented a pre-warning system for parking infractions. Drivers are warned by text message if they park illegally and will not be fined if they relocate within 10 minutes.

The system prevented 50 parking violations on the day it was launched, the government website shows.

The use of robots is also on the rise in local government services in regions including Shaanxi and Guizhou province, as well as Shanghai and Shenzhen.

The robots can instruct citizens on online government services and help with printing or copying ID cards and documents.

In one simulated situation, a robot used by Shenzhen railway police during the Spring Festival travel rush collected the facial information of a suspected knife attacker and quickly uploaded the information to a database, which helped local police capture the suspect.

The cost of those systems varies according to the scope of use and technology, ranging from around 50,000 yuan ($7,920) to hundreds of thousands of yuan, service providers told the Global Times on Tuesday.

These systems can collect and analyze information to improve the allocation of resources according to users' needs, said experts. Without feedback from users, it will be difficult to improve government services, while AI and e-government services can also help governments solve complicated problems in remote areas, Zeng Ying, a project director at Fujian Huayu Education Technology Co, told the Global Times.

However, the technologies are not being widely applied due to security concerns, and some local officials are also refusing to delegate their power, said Zhuang.

Police in Nanjing, East China's Jiangsu Province, found in a one-month public opinion survey that nearly half of those polled thought facial recognition systems were unsafe, as they believed people could access their information using their photos.

Of the complaints received, 41 percent were about the recognition service not functioning well in crowded or dark situations, while 31 complained about low recognition speed, according to the investigation released on the Nanjing government website.

To address the safety concerns, the Cyberspace Administration of China will take the leading role in protecting private information collected in government systems and local governments will be responsible for data security when the information is collected, exchanged and used, according to a central government statement.