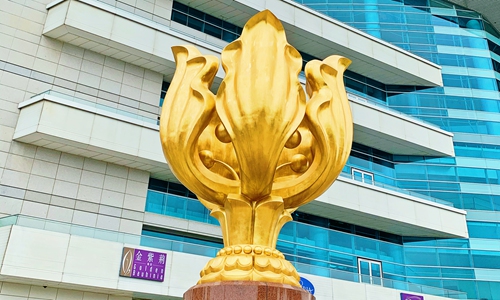 More Hong Kong people appear to support the national security law, as shown in a recent online signature drive, as the Director of the Liaison Office of the Central Peo-ple's Government in the HKSAR Luo Huining said on Wednesday Hong Kong needs to improve the legal system for safeguarding national security.

Experts noted that China could be more determinate to push the legislation regardless the intervention and stigmatization from external forces and local separatists.

Lawmakers and legal experts also noted that at present, more Hong Kong residents have realized the importance of such legislation as they saw the consequence of the loophole in the months-long turmoil in 2019, and they are now aware of the threat from external forces to the city's stability.

The HKSAR needs to uphold the rule of law and improve its legal system and enforcement mechanism to safeguard national security, Luo said in a speech on the launch of a website to promote national security education on Wednesday, which marks China's fifth National Security Education Day.

"The motherland is the solid source of strength for Hong Kong to weather storms and overcome challenges, and to safeguard national security is to protect Hong Kong's fundamental interests," Luo noted.

Hong Kong pro-establishment lawmaker Junius Ho Kwan-yiu, the initiator of a signature drive to support passing the national security law, or Article 23 of the Basic Law, in the HKSAR, told the Global Times on Wednesday that the online signature drive has received more than 1.86 million across the country, and at least one-third of the participants are from Hong Kong.

This online signature drive, which urges the HKSAR government to initiate and the Legislative Council to finish the legislation by the end of the legislative session of 2020, kicked off on February 23 and now received 1,860,431 signatures as of Wednesday. At least one-third of the participants are from Hong Kong.

Ho said the number could reach 2 million by the end of April.

The HKSAR has tried to push the national security legislation in 2003, but failed.

Ho said at that time many Hong Kong residents are impacted by the education and propaganda in the former colonial era, so they are afraid of the mainland's law-enforcement to some extent, "but today, the number of people who realized the im-portance of national security in Hong Kong has increased because they felt the pain of chaos and learned the lesson from the months-long turmoil in 2019."

Li Xiaobing, a legal expert on Hong Kong studies at Nankai Univeristy in Tian-jin, said the legislation may receive the same or even more resistance from the opposition group and separatist forces sponsored by external forces, but as long as the central government and the HKSAR government are determined and united all patriotic forces in the city to act together, it would not be a problem for the legislation.

"The law-enforcement needs to be tough and effective once the chaos created by the rioters emerged to oppose the legislation. We need to learn lessons from the 2019 Hong Kong turmoil and the Occupy Central," Li noted.

Lawrence Ma, a barrister and chairman of the Hong Kong Legal Exchange Foundation, told the Global Times on Wednesday that Article 23 enactment is a constitutional requirement.

External forces have utilized the freedom in Hong Kong as well as anti-China sentiment and anti-Chinese media in Hong Kong to concoct many anti-government protests so as to render Hong Kong anarchy and materialize it as a base for destabilizing the central government's rule of the whole of China, Ma said.

"Therefore, article 23 is necessary as no countries in this world could survive without national security laws," Ma told the Global Times.

Ho said that the external forces and separatists weren't just challenging the public order and economic development of Hong Kong, but more seriously, they are trying to weaken the Chinese identity awareness among Hong Kong residents. Ho noted that young people are being impacted the most, and this is also why many Hong Kong people would no longer remain silent.

At this stage, the purpose of the signature drive is to shape and form a foundation of public opinion to push forward the national security legislation again, Ho said.

Meanwhile, some Hong Kong senior judges said that "the independence of Hong Kong's judicial system is under assault" from the central government, and calling this "the gravest threat to the rule of law since Britain handed its former colony back to Chinese sovereignty in 1997," Reuters reported on Tuesday.

Some Hong Kong judges and lawyers allegedly told Reuters that there are signs the central government is trying to limit the authority of Hong Kong courts to rule on core constitutional matters.

Reuters said people close to the city's top judge, Geoffrey Ma Tao-li, said Ma has to contend with Communist Party officials pushing Beijing's view that the rule of law ultimately must be a tool to preserve one-party rule.

But Geoffrey Mas responded to the Reuters report saying that since his incumbent of Chief Justice of the Hong Kong Court of Final Appeal, he has never received any interference from the mainland authorities on Hong Kong's legal affairs, Hong Kong-based media Now TV reported.

"When some anti-government politicians and separatists in Hong Kong went to the US to meet US vice president or the House speaker to gain supports to create chaos in Hong Kong, did any Western media said the US is threatening Hong Kong's rule of law?"