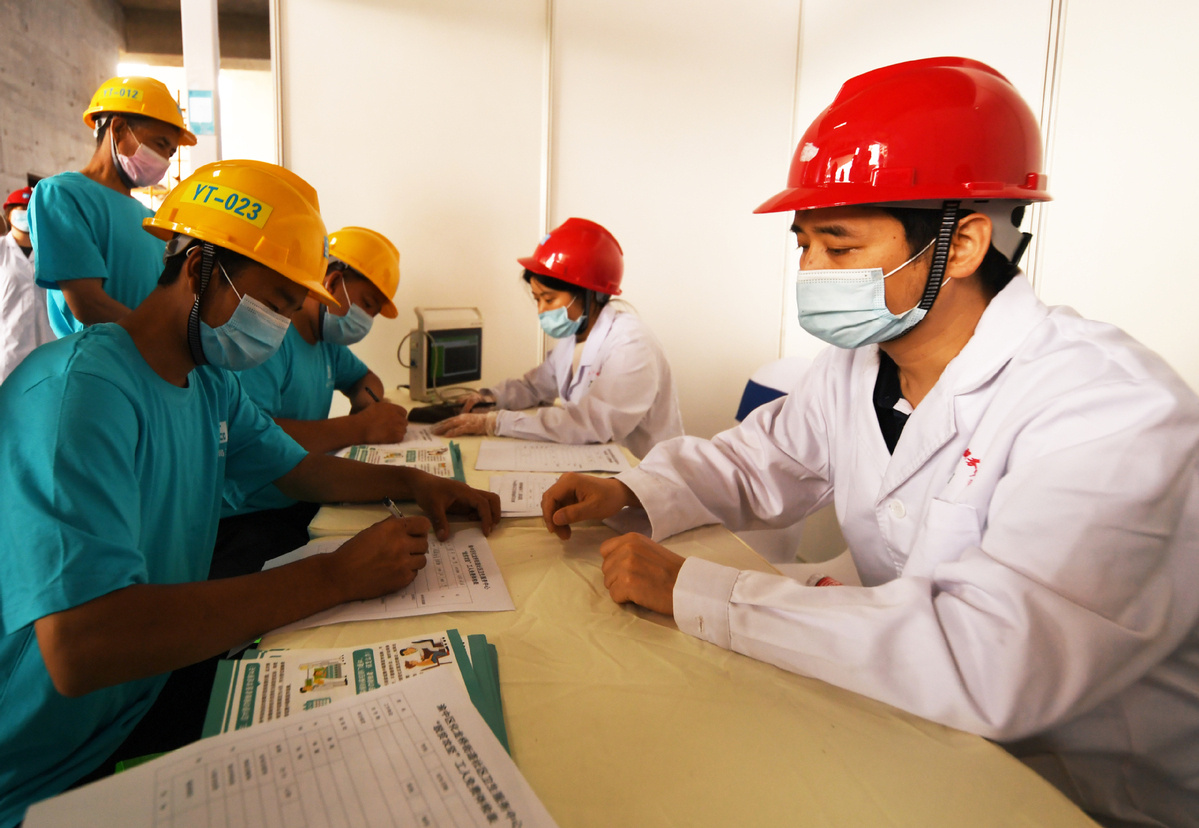 Workers from Kang county in Northwest China's Gansu province fill out health check forms in Chongqing where they land their jobs on May 20, 2020. (Photo: Xinhua)

China is creating more urban jobs for migrant workers and stimulating the development of rural industries to boost the employment of migrant workers, whose job prospects were dimmed by the COVID-19 epidemic.

As of the end of June, the number of migrant workers leaving the countryside for jobs in cities stood at 178 million, up from 122 million at the end of February and reaching over 97 percent of the number recorded last June, according to data released by the Ministry of Human Resources and Social Security and the National Bureau of Statistics.

Meanwhile, more than 28 million migrant workers from impoverished areas have returned to urban areas by the end of June, surpassing the level of the same period last year, Li Zhong, vice-minister of the Ministry of Human Resources and Social Security, said on Friday.

"But uncertainties and pressure remain ahead as many migrant workers haven't left their rural hometowns or had to come back after failing to land a stable job in cities," he said during a news conference held by the State Council Information Office.

To help stabilize employment in cities, stronger support will be provided to enterprises－especially those in the catering, hospitality, wholesale and retail sectors that typically hire a large number of migrant workers－to discourage layoffs, according to Li.

In the first half of this year, the ministry has cut corporate contributions to the old-age pension, unemployment and workplace safety insurance funds by nearly 577 billion yuan ($82.4 billion), deferred payments of 43 billion yuan, distributed about 64 billion yuan in unemployment insurance premium refunds and issued a variety of employment subsidies worth nearly 41 billion yuan.

"Implementation of these policies will be extended, and it is expected that enterprises will be relieved of a total of over 2 trillion yuan this year," he said. "Such bona fide support will play a positive role in helping companies ride through the tough times and stabilize employment."

In addition, infrastructure projects related to services and labor-intensive industries will be prioritized. "The number of job positions for migrant workers that a new project can create will be used as an important criterion for increasing land use," Li said.

Flexible employment targeting migrant workers will also be bolstered through establishing new platforms that will enable enterprises to share the use of employees, he added.

In rural areas, a multipronged approach will be adopted to guide unemployed migrant workers to find jobs in the countryside, according to Wu Xiaoling, an official with the Ministry of Agriculture and Rural Affairs' rural industry development department.

"They will be organized to pick up farming again, be employed by local projects or new types of employment, start their own businesses or take on public welfare positions," she said. "Also, more employment subsidies and onetime entrepreneurship subsidies will be issued."

As of the end of July, more than 13 million migrant workers had returned to rural villages to find jobs, and 5 percent of them had taken part in innovative businesses such as livestream shopping, Wu said, adding that the numbers of janitors, forest rangers and disinfection workers have also increased.

As the country is on track to eliminating poverty by the end of this year, Li, vice-minister of the Ministry of Human Resources and Social Security, said impoverished migrant workers will be the first in line to receive job opportunities. "We will make sure that the number of migrant workers from poor families leaving for cities this year will be no smaller than the level of last year," he said.