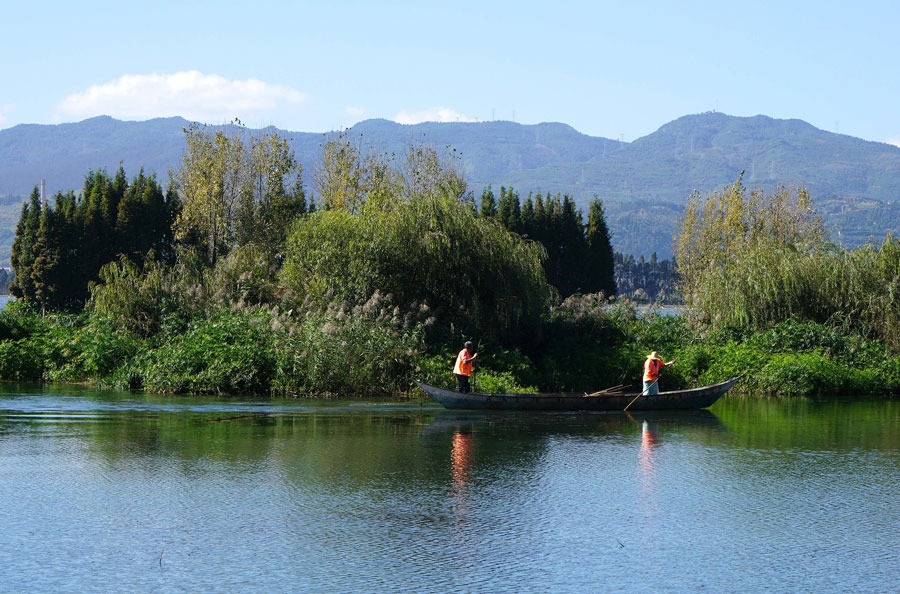 The National People's Congress will redouble its efforts to draft, revise and deliberate on laws concerning the environment, people's livelihoods and national security this year to provide better standards of living and effectively prevent risks, a spokesman for the country's top legislature said on Monday.

"We're preparing to introduce a law to protect the Yangtze River with the aim of providing legal support for governing the regional environment and ecology," said Zhang Yesui, spokesman for the second session of the 13th NPC.

He made the remark while outlining proposed legislation to reporters at the session's news conference in Beijing on Monday.

The NPC Standing Committee, the top legislative body, has always put people's livelihoods as the top priority, "so we'll go on drafting and deliberating on laws regarding civil codes and healthcare", he said.

Given that national security needs to be further guaranteed, he said, "We're planning to draft laws on export controls, data security and bio-security in order to strengthen the capacity to prevent security risks."

In addition, laws on personal information and artificial intelligence are also being studied to ensure people's protection, regulate data collection and promote the development of new technologies, he added.

The NPC Standing Committee also conducted several inspections of law enforcement, and asked judicial officials from the top court and top procuratorate to answer questions from deputies for the first time last year.

Fu Yuhang, an NPC deputy from Sichuan province, was pleased to hear that legislation to protect the Yangtze River is being accelerated, saying it represents the country's determination to combat pollution.

Fu, who lives along the upper reaches of the river and is also a water pollution researcher, said, "I will not only keep my eyes on the related legislation, but also shoulder my responsibility to protect the environment in the region."

Wang Mengmeng, a deputy from Anhui province, said ecological protection is also her concern, "as everyone demands a better environment for a better life".

She said she looks forward to the legislation concerning personal data protections, adding that the more regulated use of information will contribute to protecting people's privacy.

Both deputies suggested the legislature should solicit more public opinions in drafting and revising related laws.

Zhang, the spokesman, said the 13th NPC and its standing committee extended great efforts and enacted a series of laws last year. For example, they provided a strong constitutional guarantee for maintaining and developing "Socialism with Chinese Characteristics for a New Era" by passing an amendment to the Constitution in March 2018.

A law that clarified the responsibilities and power of the supervisory commission was also adopted during the first session of the 13th NPC.

Additionally, laws including those meant to regulate e-commerce operators and legislation aimed at preventing soil pollution were also unveiled last year after sufficient deliberations by the standing committee.