More middle-aged and elderly people in China, a group of consumers who had previously been tech-resistant, are embracing online shopping during the COVID-19 epidemic. 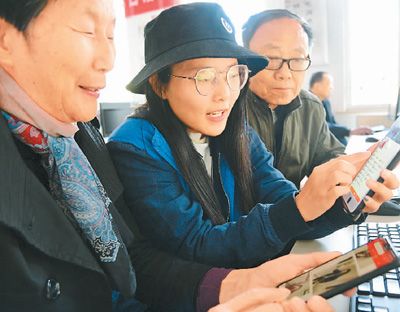 According to a new report from QuestMobile, a Chinese data analytical firm, the number of monthly active mobile internet users increased by 15.7 million during the spring season from a year ago, 61 percent of whom were aged above 41.

Data from online fresh food platform Miss Fresh shows that the number of its new users above the age of 40 soared by 237 percent during the spring season, 90 percent of whom learned how to place orders online from their children.

In addition, China's food delivery giant Meituan saw a 36.7-percent growth in new users born in the 1960s, while users above the age of 50 on Eleme, Meituan's main rival, increased 2.3 times month on month.

Tech-savvy middle-aged and elderly people are turning to more e-commerce channels for their shopping than the younger generation, according to industry experts. The older generation is also placing orders on short video platforms and group buying apps.

The older generation is also more willing to pay for online courses catering to their personal interests, such as the Chinese zither, according to a survey.