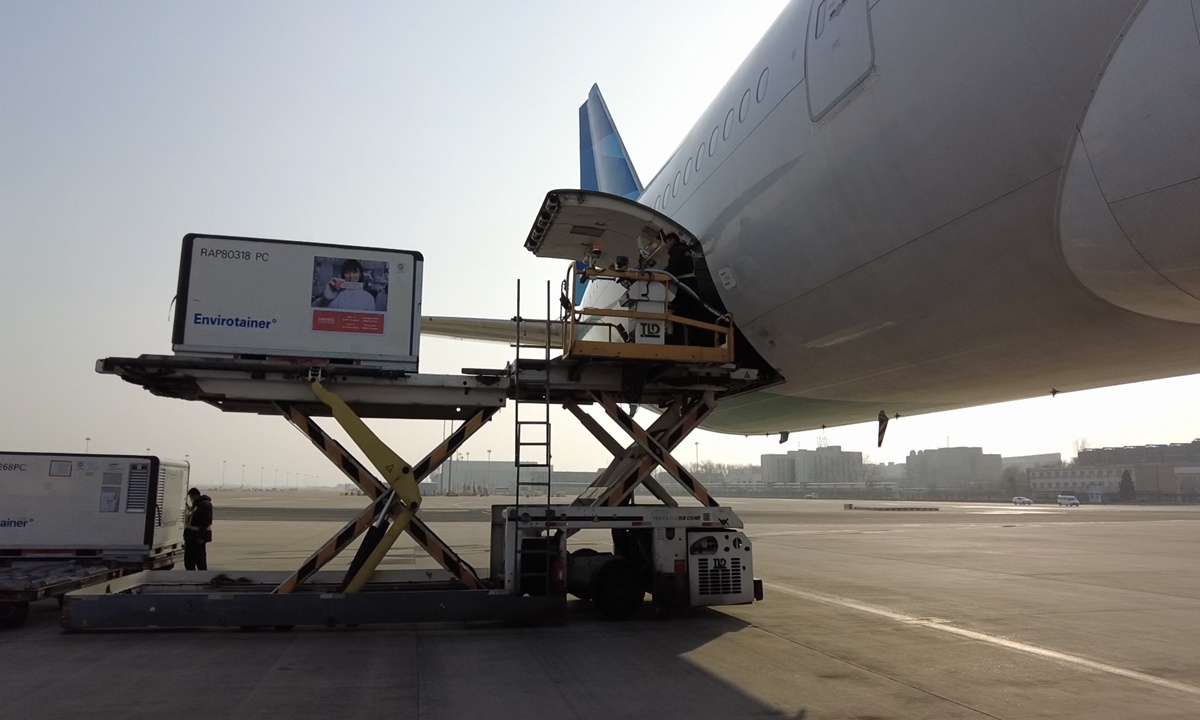 The first shipment of 1.2 million doses of the COVID-19 inactivated vaccine called CoronaVac arrives in Indonesia on Sunday. Photo: Courtesy of Sinovac

The first shipment of 1.2 million doses of the COVID-19 inactivated vaccine called CoronaVac arrives in Indonesia on Sunday. Photo: Courtesy of Sinovac

As global vaccine providers speed up trials and various countries scramble to set up distribution, December has become a flashpoint for the global vaccine race as COVID-19 vaccine candidates approach the end of late-stage testing.

Due to their technological advantage and relatively easier logistics, Chinese-developed inactivated vaccines are being secured by more countries for their first dose. Many are pinning their hopes on the traditional vaccine type and expressed their confidence in its reliability.

Indonesia received its first shipment of 1.2 million doses of the COVID-19 inactivated vaccine called CoronaVac from China on Sunday to prepare for a mass inoculation program.

The Indonesian government plans to bring in 15 million more doses of semi-finished vaccine products this month, while as many as 30 million semi-finished doses are expected to arrive in January to handle the pandemic, which has killed more than 17,740 in Indonesia, said President Joko Widodo on Sunday in a television speech.The Global Times learned from vaccine producer Sinovac on Monday that the doses are proportionally diluted vaccine concentrates that will be further processed by Indonesian state-owned vaccine producer Bio Farma to package it in bottles or syringes.

Cooperation with Indonesia was achieved by direct communication between the two countries, as opposed to how Indonesia cooperates with Western pharmaceutical companies like AstraZeneca, which was done through third parties like the COVAX Facility, a WHO-coordinated pooled procurement mechanism for new COVID-19 vaccines, according to the Sinovac.

"In the last week or two, communication has not been carried out day to day, but hour by hour," said Marsudi, thanking the Indonesian Embassy in Beijing and Sinovac for facilitating matters "with great care and in accordance with applicable regulations."

Brazil's most populated state Sao Paulo secured its first dose with China's CoronaVac, as it received the first batch of 120,000 doses in November and 600 liters of vaccine concentrate on Thursday, making Brazil the first country in Latin America to receive a vaccine against the coronavirus. 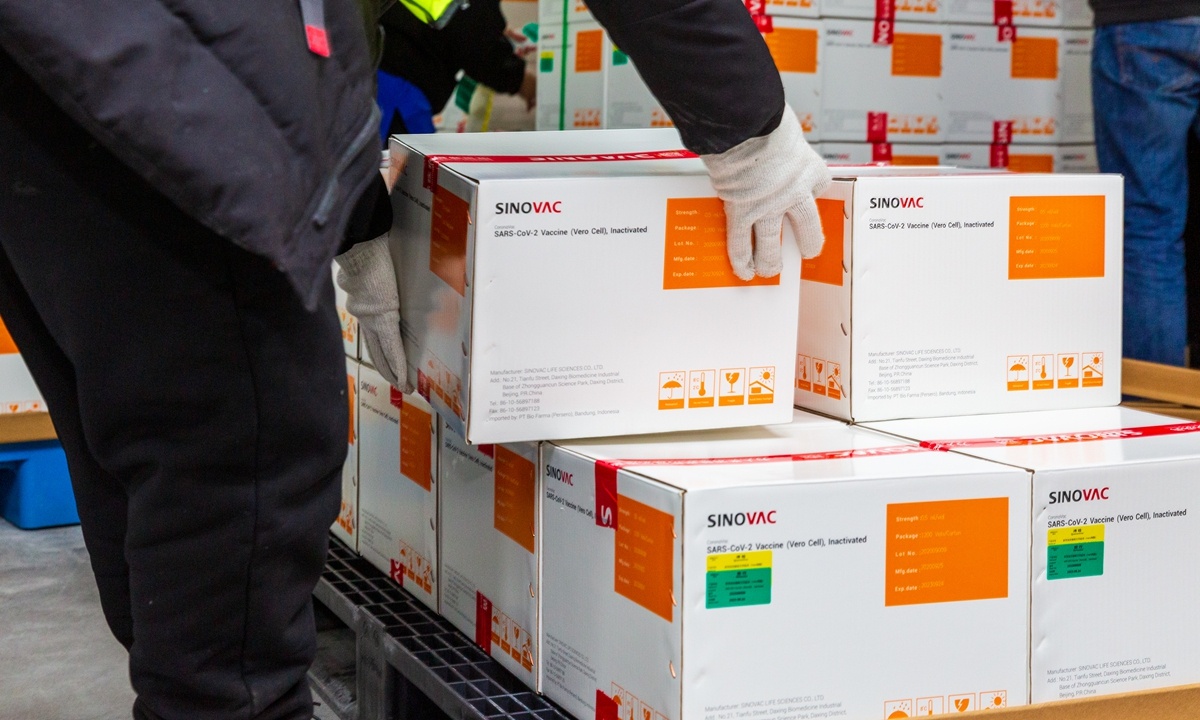 On Wednesday, Turkey's health minister announced an immunization plan using a Chinese-developed COVID-19 vaccine later this month to cope with a surge in infections and deaths.

Turkish Health Minister Fahrettin Koca said the country had signed a contract to buy 50 million doses of the COVID-19 vaccine from China's Sinovac.

Koca said the vaccine produced by the "inactivated method" is more reliable because "it is the best known method in history and its long-term consequences are well known."

The more recently-developed mRNA vaccines, developed through genetics of the virus, "worked well in the short term but we do not know what effect it will have in the medium and long term," Koca said in an interview with local media on Friday.

The vaccine expert also pointed out that transporting the US-made vaccine poses a big hassle. "Usually, vaccines are stored at 2-8 C, and that is not possible for Pfizer and Moderna vaccines … there is no problem for China's inactivated ones to be shipped abroad."

The Pfizer-BioNTech and Moderna products are both made using a revolutionary genetic technique, but need to be stored at very low temperatures - minus 70 and minus 20 C respectively - which pose serious barriers to logistics in some underdeveloped countries, analysts said.

In response to questions as to why China has not presented their trial data, Jiang said that Pfizer and Moderna conducted trials in countries where the virus is rife, which helps them gather efficient data on short notice. China only has a few cases, and countries like Brazil and the United Arab Emirates also have fewer cases than the US and Europe, said Jiang.

When Deutsche Welle questioned the Chinese vaccine's efficiency by hyping the discovery that the Chinese vaccine reported lower antibody levels than that of recovered COVID-19 patients, immunology experts claimed it is completely normal in immunity rules.

"The pathogens in the recovered patients are much more active than that of the inactivated vaccines, so the levels of antibodies they produce are necessarily higher than in those with inactivated vaccines," a Beijing-based immunological expert told the Global Times on Monday.

"There won't be much difference between the two types of vaccines in terms of the duration of effectiveness," said the expert.

As more countries, including the UK, Japan and Russia, are eager to roll out mass vaccination programs, China seeks steady progress and a scientific way for vaccines on the market.

Sinovac announced on Monday that it has received about $500 million from Sino Biopharmaceutical for the development, manufacturing and capacity expansion of vaccines.

The company has developed its second vaccine production line with target overall volume at above 600 million doses in 2021. The current production volume is at 300 million doses by the year end, according to the statement Sinovac sent to the Global Times.

Sinovac said it has initiated its vaccine phase one and two clinical trials for underage groups on Monday.

Another leading producer Sinopharm told the Global Times on Sunday that it keeps improving its late-stage data against the clock upon the Chinese regulator's feedback and request.

The UK, being the first Western country to begin mass vaccinations, has secured the Pfizer vaccine. Other Western countries may soon follow the UK and kick off mass inoculation with the Pfizer and AstraZeneca vaccines.

Experts have called for more caution in the early release of vaccine protection rate data, urging China's regulator for stricter rules and internationally recognized technical standards in approving the vaccine.

Sinovac has been relatively careful in saying they can't predict the outcome, saying they expect to hear a positive assessment from Brazilian health regulator National Health Surveillance Agency (Anvisa), one of the world's most rigorous reviewers, over their phase three data in Brazil in mid-December.

Anvisa concluded its inspection of Sinovac's vaccine production line in Beijing on Friday.

Jiang predicted that phase three data results of at least one Chinese vaccine candidate will be released in one to two weeks.