June 7 and 8 were big days for many Chinese families. Chen Jingjing’s parents were no exception, even though they currently work in Brazil. Like many overseas Chinese students, Chen was sent to Qingtian High School to sit the annual college entrance exam, or Gaokao as it's known in Chinese. 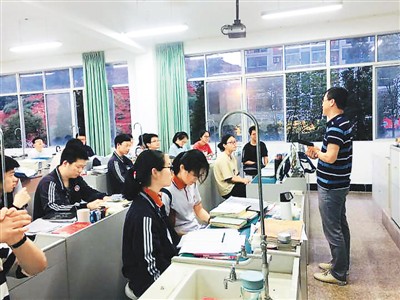 Qingtian High School in Zhejiang province, a well-known hometown of overseas Chinese, saw 112 children from overseas Chinese families take the Gaokao this year, up by one third when compared with 2016.

Lin Yingcai is a junior at Jinan University, a famous college in China. Lin says that he was born in an overseas Chinese family and has been surrounded by Chinese culture and language since childhood. He was told to never forget his roots in China, and it's clear he hasn't.

In recent years, second and third generations of overseas Chinese have shown their own initiative in returning to China, according to Zhang Jie, a Chinese teacher sent abroad by the Overseas Chinese Affairs Office of the State Council of China.

Zhang noted that with the proposal of the “Belt and Road” Initiative, China has greatly enhanced its overseas image. Overseas Chinese now believe that China is full of opportunity, and many hope to study and seek future development in China.

Feng Ronghui, another overseas Chinese student studying at Jinan University, says that China’s assortment of rich educational resources is one of the important reasons that he has returned to China for higher education.

While many overseas Chinese hope to send their children back to China for higher education, they are faced with difficulties including choosing a school, proficiency in Chinese language and different textbook content.

To solve these problems, Huaqiao University and Jinan University have been working together to hold a joint college entrance examination for overseas Chinese, formulating targeted content for the exam according to overseas educational systems.

Hong Xuehui, director of the admissions office of Huaqiao University, told People’s Daily Overseas Edition that the joint entrance examination has proven effective over the last 30 years, and that they prepare undergraduate courses for students according to their entrance exam scores.

With the deepening educational system reform, China’s universities have been developing continuously towards an international level and have gradually gained worldwide recognition, says Hong.