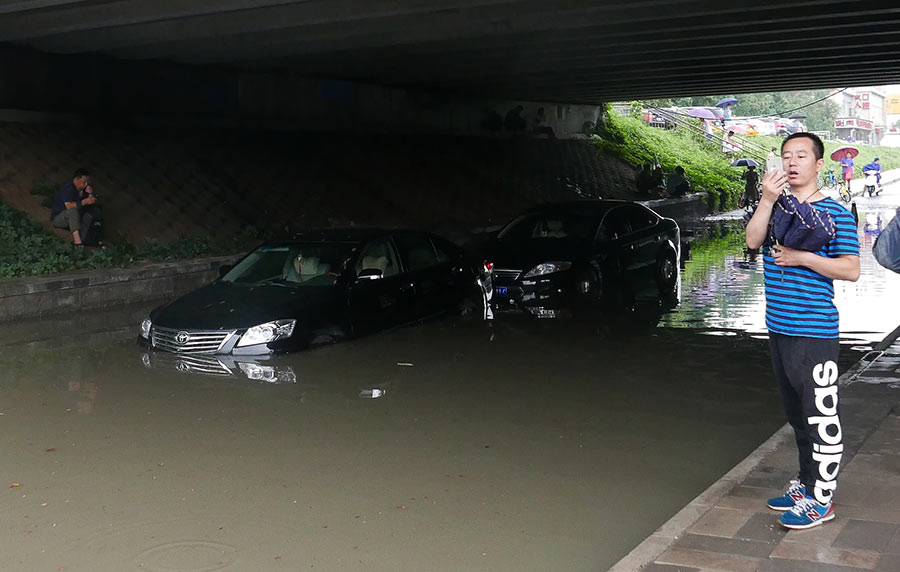 Two cars are stuck under a bridge in the Huilongguan residential area of Beijing on Monday morning. Intense rainfall earlier in the day flooded the passage. (Photo:China Daily)

Beijing is expected to see more brief but strong rainfall in the coming two days after thundershowers brought floods to some lowland areas and water bodies in the city and causing some roads to collapse on Monday.

Average precipitation in the capital from 8 pm on Sunday to 10 am Monday reached 36.6 millimeters, according to Beijing Meteorological Service.

The heavy rain brought the biggest flood of the past two decades to the Baihe River in Miyun district at around 6 am. The water level in Dashuiyu Reservoir was 1.7 meters above the safety level, according to the Beijing flood control authority.

It said 782 people from Miyun, Huairou and Fangshan districts were evacuated. According to the Beijing municipal government, 128 tourist sites were temporarily closed as of 4 pm. The rain also led to road collapses in nine places.

Some bridge underpasses were also flooded, and some areas near the Xi'erqi subway station were inundated. Some cars broke down in the water.

Beijing Public Transport said it had to adjust routes or stops of 26 buses to avoid flooded areas as of 1 pm.

Many flights at Beijing Capital International Airport were canceled or delayed. According to the airport authority, the weather forced a 40 percent decrease in traffic capacity between 8 and 12 am on Monday.

As of 2 pm, China Southern Airlines had canceled 37 flights. The company said flight delays were expected to continue until 6 pm. Air China also canceled 61 of its flights as of 1 pm. 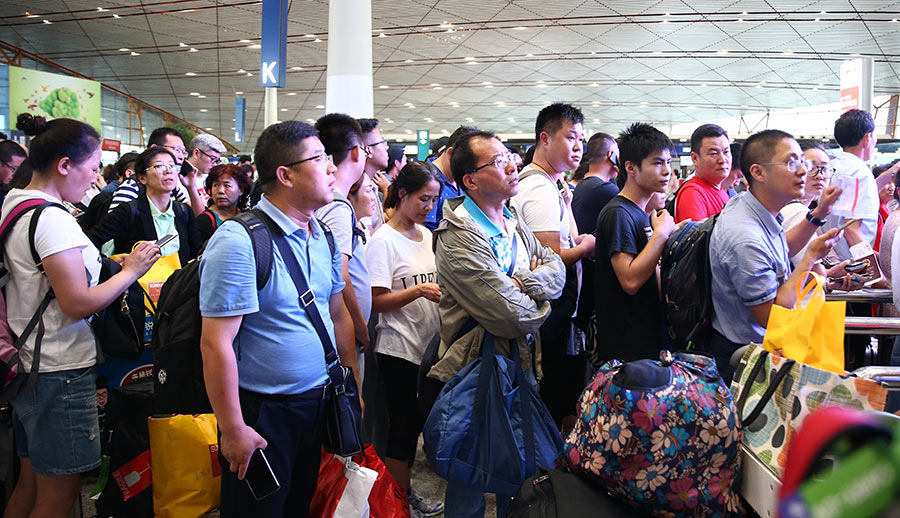 Passengers were stranded at Beijing Capital International Airport on Monday because of storms. (Photo: China Daily)

"Beijing has been affected by unstable convection, with high temperature and high humidity, which can easily result in severe convection featuring brief strong rainfall," said Zhang.

She also said warm air in the southwestern part of the subtropical high has been contributing abundant water vapor to the capital.

From Monday afternoon to Wednesday, Beijing will see more rain. On Tuesday, most areas in the capital are expected to receive rainfall of 30 to 40 millimeters. Hourly precipitation may be as high as 50 millimeters, she said.

On Monday, rescuers continued safety measures following a landslide of 5 million cubic meters of soil and rock on Thursday in Nanyu township, Gansu province. About 10,000 cubic meters of the debris entered the Bailong River, partly blocking the river and increasing the water level by about 7 meters.

More than 400 tents were set up in case more of the debris entered to block the river and flood nearby homes, local authorities said. But they noted that the water level had subsided.