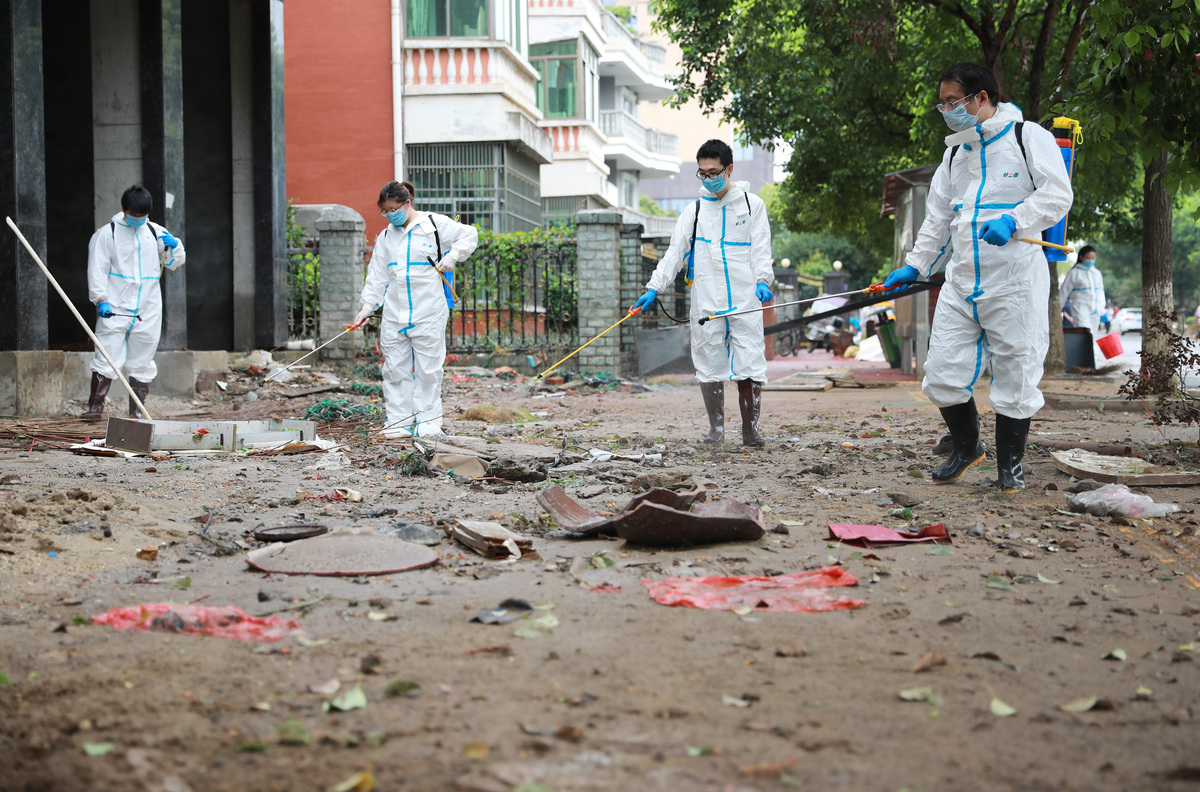 More rainfall is expected as the fight continues against floods and their aftermath, which have forced the evacuation of some 1.3 million people and caused direct economic losses of 53.4 billion yuan ($7.7 billion), primarily across a large band of southern and eastern China.

Nearly 20 million people were affected and 582,000 people were in need of emergency aid as of late Thursday, according to the Ministry of Emergency Management.

Downpours are forecast to continue in the coming week, especially in Zhejiang, Fujian, Jiangxi, and Hunan provinces and the Guangxi Zhuang autonomous region.

"A lot of water has accumulated in many of the regions because of previous precipitation. The coming heavy rain will make the flood control situation even grimmer," the ministry said.

Rainfall of up to 20 centimeters was forecast to hit some areas in Hunan, Jiangxi, Anhui and Zhejiang provinces and Guangxi in the 24 hours leading up to 2 pm on Saturday.

The regions also were forecast to see brief but strong bouts of rainfall, with hourly precipitation of up to 6 centimeters, and some were expected to see gale-force winds and thunderstorms, the national observatory said.

Hunan is one of the provinces that has been hit the hardest. Rains between July 6 and Wednesday brought an average of about 95 millimeters of precipitation to the province.

That caused the worst flooding in five decades in the lower reaches of the Xiangjiang River, a major tributary of the Yangtze River, according to the Ministry of Water Resources.

"The country has entered a critical stage for flood control and drought relief work" for this rainy season, said E Jingping, minister of water resources and also deputy head of the State Flood Control and Drought Relief Headquarters, in a national flood control conference on Thursday.

He asked for patrols to be increased to ensure the safety of river dikes and reservoirs and instructed local authorities to carry out surprise inspections to see if officials have fulfilled their duties.

Previously, seven work teams had been dispatched to different regions to guide flood control work. The ministry will send two more, led by two vice-ministers, to Hunan and Jiangxi to facilitate precautionary measures by local governments, he said.

The ministry sent a notification to local water resources management authorities on Thursday, asking them to intensify flood control preparations.

"Personnel should be dispatched for continuous patrols of reservoirs, especially small ones, in areas to be hit by downpours, and they should be on duty 24 hours a day to ensure safety," the notification said.

The Ministry of Emergency Management has asked its rescue teams to ramp up their emergency readiness and to station staff in areas of high risk based on timely analysis of the flood control situation. It also asked local authorities to draft detailed plans for flood control and prepare materials and equipment needed in advance.