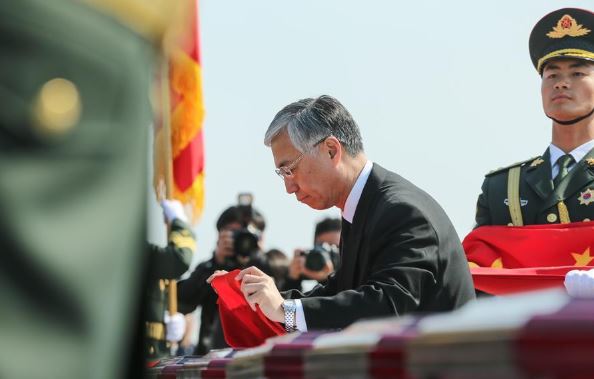 Chinese Ambassador to South Korea Qiu Guohong (C) places a Chinese national flag on a coffin containing the remains of a soldier of the Chinese People's Volunteers dead in the 1950-53 Korean War, during a transfer ceremony at Incheon International Airport in Incheon, South Korea, April 3, 2019. (Photo: Xinhua)

SHENYANG, April 3 (Xinhua) -- The remains of 10 Chinese soldiers killed in the 1950-53 Korean War were returned to China on Wednesday from the Republic of Korea (ROK).

Escorted by two Chinese fighter jets, a plane carrying the remains and 145 belongings of the fallen soldiers landed at an airport in Shenyang, capital of northeast China's Liaoning Province, at around 11:36 a.m.

More than 200 people attended a ceremony held at the airport to welcome back the martyrs.

The remains will be buried in a martyrs' park in Shenyang, with a burial ceremony due to be held Thursday. Remains of a total of 589 soldiers sent back from the ROK have been buried there between 2014 and 2018.

The Chinese People's Volunteers fought with the Democratic People's Republic of Korea's army in the Korean War against the ROK army and US-led UN forces between 1950 and 1953.