○ In recent months, an increasing number of teachers in China have been suspended or fired after being reported by their students for making inappropriate remarks in class
○ The trend occurs at a time when China has been strengthening ideology and preventing foreign infiltration in campuses
○ Some think it is fair for teachers of public schools to be held accountable for their remarks 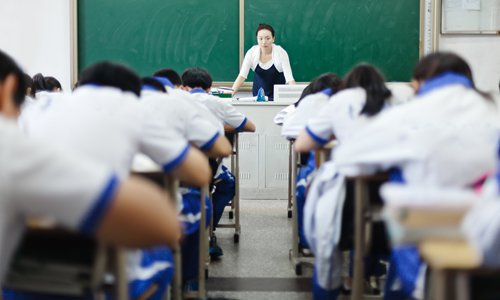 Using the hashtag "Stay with us Mr You from Tan Kah Kee College," students and alumni of Xiamen University's Tan Kah Kee College launched a campaign Wednesday on microblogging site Sina Weibo, hoping to keep You Shengdong, a professor teaching international trade and world economy, from being fired.
Students and alumni told the Global Times that You, aged 71, was suspended after a student reported his remarks in class to the school administration. Although the exact remarks that caused the professor to be suspended were not disclosed, You has long been known for his boldness and outspokenness.
Chinese universities have been increasingly responsive to student reviews of teachers in a drive to improve education quality. However, many other students have expressed dissatisfaction toward the student's complaint about You.
"Mr You cares about his students and I'm honored to take his class this semester. I don't understand why someone would report a good teacher like him," a blogger, who identified herself as a student at Xiamen University, wrote on Weibo.
An unofficial account of Tan Kah Kee College, which covered the incident, has received over 400 comments and 99 reposts, most of which called for the professor to stay. You is the latest example in recent months of teachers being reported by their students for suspected politically inappropriate statements made in the classroom that violate China's regulations on teacher ethics.
In October 2014, China's Ministry of Education rolled out seven regulations on teachers regarding their moral ethics. Teachers are banned from infringing upon national interest, plagiarism, corruption, committing sexual harassment and violating the policies of the Party during teaching activities. Teachers who violate these regulations can be given administrative penalties, demoted, have their contract terminated and fired.
Last year, the Central Commission for Discipline Inspection (CCDI) of the Communist Party of China (CPC) inspected 14 universities including Peking, Tsinghua, Zhejiang and Xi'an Jiaotong universities, finding that many of them failed to fulfill the responsibility of doing ideological work, People's Daily reported.
Chen Baosheng, China's Minister of Education, wrote in Party-run magazine Ziguangge in December 2016 that "the education system is the frontline of the Party's ideology work… The enemy forces infiltrate us first through our education system, our campus."
The universities were also criticized for failing to thoroughly implement the Party's major education policies or only doing a perfunctory job at it, Xinhua News Agency reported.

Student supervision
There have been an increasing number of teachers being reported by their students in disagreement with what they say in class.
In April, Xu Chuanqing, a teacher of mathematics at the Beijing University of Civil Engineering and Architecture, was given an administrative penalty after she was reported by her student on WeChat and Weibo platforms. The student accused her of saying that Japanese are more superior than Chinese as a people. The post attracted many indignant comments and reposts, ultimately leading to Xu being punished.
Xu, however, denied the accusations, and made a written response on June 1, explaining that the incident occurred in September 2017 during her probability class. Xu said she noticed that most of her students were looking at their mobile phones during class, so she mentioned a former Japanese student who worked really hard and used him as a good model.
"I then told the students that if you don't work hard, Japan will become a superior nation and we will become an inferior one; that's what I thought," she wrote. The university did not respond to Xu's response.
In the same month, a teacher at the Zhongnan University of Economics and Law was reportedly given an administrative penalty, suspended and then expelled from the Party for remarks that violated Party policies, after being reported by her students.
High-school teachers are also involved. Earlier this year, a high-school politics teacher at Nanjing's prestigious Jin Ling High School was reportedly suspended for criticizing public-ownership. He was suspended after a student reported him on the website of Nanjing's education bureau.
Posts reporting the teacher can still be found on online forums, entitled "Complaints about Rao Yirong from Jin Ling High School." "As a politics teacher, Rao Yirong publicly denounces the socialist public-owned economy, and one-sidedly publicizes the negative influence of a State-owned economy," the post reads.
Information officers
Teachers penalized or suspended for their wrongful remarks is nothing new in China. She Jiepeng, who went by the handle "Lianghuiwang" on Weibo, was expelled in 2017 from Beijing Normal University for publishing improper remarks online. Li Mohai, a politics teacher at Shandong Technology and Business University, was also suspended last July after his Weibo account was found posting inappropriate remarks that incurred reader complaints.
But these teachers were mostly reported by netizens, while the increasing number of cases of students reporting their own teachers is something relatively new.
Many feel it is fine to report teachers as long as their remarks are wrong and unhealthy for students. "As a teacher, your class is public and your remarks should serve educational purposes. It isn't your personal class after all," a blogger said on Sina Weibo.
"If my teacher made such remarks, I would report him. Each case should be viewed according to its context," another Weibo user remarked.
Others disagree. Commentating on the case of Xu Chuanqing, Qi Liang, a commentator, wrote on his public account that while the teacher should not have compared her students with the Japanese, it was also morally wrong for the student to report her.
"The student can voice his opinions or even criticize the teacher, but he should not exaggerate the seriousness of the incident and stick labels on his teacher," he wrote.
It is in fact commonplace for Chinese universities to monitor their teachers' attitudes and class quality. Many universities and colleges assign student information officers, asking them to monitor education quality and collect students' opinion on teachers.
According to a 2017 document on the website of Shandong Normal University, each major should employ one student as a student information officer, whose tenure is one year. The student should report students' opinions on the school's teaching plans, content of teaching, teaching methods and infrastructure, as well as teachers' attitude and quality.
The student should fill out a form reflecting this information at least once every two weeks, and those completing the task well will be given material and spiritual encouragement.
At some universities, including Shanghai International Studies University, the identity of the student information officer is intentionally kept a secret to ensure authenticity. A 2017 document on the university's website says the dean's office and the faculty have non-disclosure responsibilities for the student information officer.