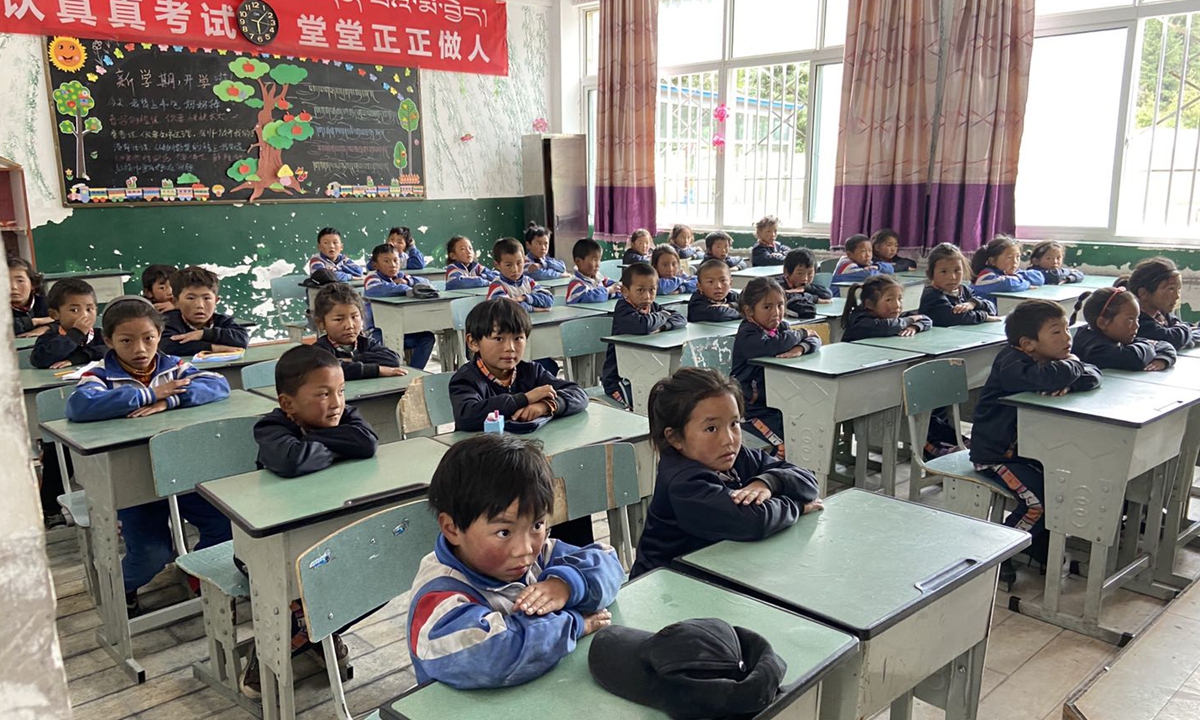 Those who could score high marks on the examination can enroll in schools in other parts of the country to attain better education and fulfill their academic dreams.

In contrast to other mainland schools, these students dress differently with many wearing traditional Tibetan clothing.

Li Dongrui, the school's principal, told the Global Times about 60 percent of students in the school are Tibetans. Programs for all the students are the same, except that Tibetan students are required to study Tibetan language. They also need to take a Tibetan language exam during the junior school entrance examination.

Most of the teachers in the school are Tibetans, so they can provide bilingual teaching to Tibetan students. Students of Han ethnicity have the option to also learn Tibetan language.

The school, founded in 1951, is well-known in Tibet as it was the first school in the region that provided modern education. Throughout history, people there could only get education at monasteries and a few old-fashioned private schools.

Qamdao Primary School initially did not attract many students. Local people who were accustomed to nomadic life were unwilling to send their children to school. There were only three classes which taught more than 60 students with less than 20 teachers.

But a shift has taken place, especially after 2016 when the country started a nationwide targeted poverty alleviation campaign. An unprecedented number of parents are now hoping to send their kids to schools, Pasang Tsering, director of local educational bureau, told the Global Times.

He noted that infrastructure like roads in Tibet has been greatly improved and many families now buy their own cars. The per capital income also increased, which caused a frequent flow of people, he said. With the increased flow of people, people who used to live a remote nomadic life have more chances to be exposed to urban life and the importance of education. Without enough knowledge, many found it challenging to live in the city.

China also released preferential policies toward minority groups in Tibetan schools. Since 2012, Tibet began to offer a free 15-year education program to young Tibetans, a policy to advocate fair education in the less-developed areas. Students here don't need to pay for their educational fees and their living costs at the schools are also covered. For students who did not eat at schools, their families can receive free food supplies.

Tsering Qoxi graduated from Qamdo Primary School in 1994. In 2003, she returned to the school as a teacher.

She told the Global Times when she first became a teacher, parents were reluctant to send their children, so she had to visit their homes to persuade them to send children to school.

But now, parents are waiting in lines for a place at the school. The school has had to lift their enrollment threshold due to the increasing demand over the past few years. In the past, any student who applied for the school could get enrolled.

Now the school has 38 classes which host more than 2,200 students. Tsering Qoxi said the school does not need to do any promotional work as there are already too many students seeking to attend.

She said nobody thought this way as these Western media outlets accused.

"The ordinary people are willing to send children here to study. Ever year when the enrollment season started, some parents whose children are unqualified for the school even waited outside the school gate for weeks [to ask for a place]," she said. "The reason behind this change is they are now aware that studying can truly change lives. In the past, they did not think this way."

A third-grade student named Tenzin Gyatso told the Global Times he wants to get enrolled in other mainland junior high schools, and his dream is to become a solider like his father.

"My life in the school is happy. I make good friends with students of Han ethnicity. We play together. There is no hurdle between Tibetan students and Han students," he said.

In another boarding school named Yiri Ecological Forest School that the Global Times reporter visited, slogans including "knowledge is power," "education changes lives," are common postings in the hall.

While the school is located at a place far away from the city, it still has nearly 300 students. The village the school sits in only has about 2,000 residents. The school's principal Losang Tsering said that he does not need to worry about whether there are enough students attending schools these days, something he worried about eight years ago.

He said the students returned home once a week and their home can be as far as 35 kilometers. The Global Times reporter also visited the school's classrooms where young students were learning both Putonghua and Tibetan language. While the classroom hardware is not as good as those in metropolitan cities like Beijing, the students there expressed appreciation for the simplicity and availability of books.

Reciting aloud in the classrooms, students demonstrated a strong motivation to change their lives through education.

Principal Li came from a school in Tianjin to Qamdo Primary School last year as part of an aid program to the region. She is also the school's first principal coming from outside Tibet.

Li told the Global Times that unlike the school where she taught, Tibetan parents and students here care more about the scores. She hopes to bring in some changes, and cultivate students' comprehensive qualities.

Instead of asking students to just memorize the books, she leads students to think more about the meaning of the books. She also lets students participate more in the classrooms and organizes seminars to train Tibetan teachers at the school to gradually change their pedagogy.

In the Yiri Ecological Forest School, the principal Losang Tsering said in addition to study, he also tried to instill environment protection knowledge to the students.

He exhibited a short book in Tibetan language which they compiled to teach environment protection. The school also transformed their toilets into water toilets.

"The environment is the most treasurable resource in Tibet. So I want them to know it and do what they can to protect our land," he said.