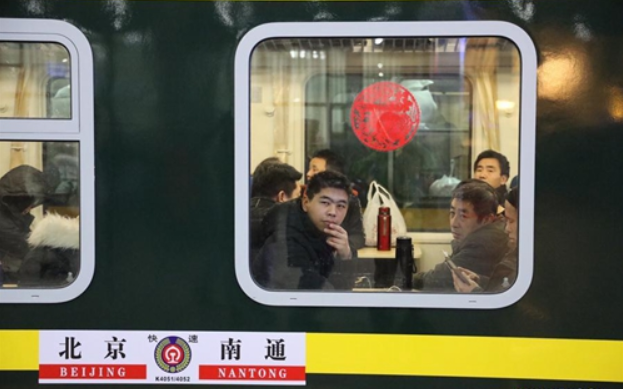 Passengers on the train K4051 to Nantong City in east China's Jiangsu Province wait for departure at the Beijing Railway Station in Beijing, capital of China, Jan. 21, 2019, the first day of the 2019 Spring Festival travel rush. (Photo: Xinhua)

The Spring Festival travel rush, the biggest annual human migration in the world, has kicked off in China, but Dong Liangjian (pseudonym), from Xiangtan, Central China's Hunan Province, now working in Guangzhou, will not be part of it this year. Instead, he has asked his parents to travel to Guangzhou for the family reunion.

Dong is one of a growing number of younger-generation Chinese that will ask their parents to travel to the cities they work in, mostly in first- and second-tier cities, rather than visiting their hometown, in a new trend called "reverse Spring Festival travel."

For Dong, asking his parents over saves him from having to face the trials and tribulations of the Spring Festival travel rush, which often includes having to set an alarm clock early to grab railway tickets and standing for hours in overcrowded trains.

"It's much easier for my parents to come to Guangzhou than me going to Xiangtan as there are lots of tickets for trains coming to Guangzhou. Guangzhou is also better for them in the winter because it's warmer. They can stay here for as long as they want and there is no need to rush back for work," Dong, 33, who's married and works at a trading company, told the Global Times.

This Spring Festival, travelers are expected to make 2.99 billion trips, up 0.6 percent from the year before, according to the Xinhua News Agency. But the number of passengers traveling in the opposite direction of high demand routes has been increasing at an annual rate of about 9 percent for the past four years, Li Wenxin, a vice-general manager at China Railway Corp, said at a recent press conference.

Lower travel costs and less hassle are the major reasons why a growing number of people have chosen to ask their parents to travel to the cities they work in.

A search of online travel agencies shows that a week before the Spring Festival, airfares from top-tier cities to destinations like Harbin, Chengdu and Xi'an are all going at full price. However, tickets to Shanghai, Beijing and Shenzhen from smaller cities enjoy discounts of between 10 and 50 percent.

Statistics from online travel agencies show that orders for standard tickets to first-tier cities such as Shanghai, Beijing, Guangzhou and Shenzhen before the Spring Festival have increased 40 percent year-on-year, according to Beijing Business Today.

Li said China Railway Corp is also offering as much as a 35 percent discount to routes that are not traditionally in hot demand during Spring Festival.

He added that the railway company is happy to see this new trend, as it means better utilization of railway capacity, more balanced passenger numbers on trains going in opposite directions, and smoother travel during the Spring Festival.

Not everyone, however, enjoys the idea of asking their parents over. Some people think they will not be able to accommodate their parents well in top-tier cities during the Chinese New Year, while others prefer the tradition of going back to the hometown for the festival.

Winnie Sun, a 31-year-old public relations officer from Shandong Province now working in Beijing, said she would only consider asking her parents over for Spring Festival if she owned her own apartment in Beijing. "I rent a small studio apartment in Beijing, and I can't imagine bringing my parents here because it would be so crowded. In comparison, my parents' home in our hometown is much bigger and cozier. Besides, I come from a big family so there are a lot of relatives to visit during the Spring Festival," she told the Global Times.

A man surnamed Song from Anhui Province said he used to ask his parents to come to the city he worked in, but his parents weren't interested in shopping and sightseeing there, and would rather have been with relatives and old friends during the New Year. "My parents weren't so happy that Spring Festival," he told Wuhu News.

The "reverse Spring Festival travel" trend has attracted the attention of many media outlets in China.

"It shows that a lot of migrant workers now have stable housing in big cities, which makes them feel at home… This can also relieve the transportation pressure during the Spring Festival and boost the tourism market," according to a commentary on CCTV.com.

Another commentary on eastday.com said this is a wise change to the traditional travel rush. "Home can be anywhere as long as a family gets together. Reverse Spring Festival travel is a smart way for people working in the cities to reunite with their families," it reads.

Besides asking parents to visit the city they work in, more and more people choose to travel together with their family during the Spring Festival rather than staying at home. According to statistics from several online travel agencies, Chinese people are expected to make 400 million trips for sightseeing during the holiday, including 7 million trips abroad covering 900 destinations in 96 countries and regions, people.com.cn reported.

Cities in southern China such as Sanya, Xiamen, Kunming and Lijiang, and northern Chinese cities such as Harbin are among the popular domestic tourist destinations during the Chinese New Year.

Despite these changes, some issues will continue to challenge the Chinese during the Spring Festival.

For married couples, the question of which hometown to visit during the Spring Festival can be a thorny one.

According to a survey by China Youth Daily and wenjuan.com of 2,001 married people under the age of 35, 70 percent of respondents were troubled by this question. Among all the respondents, 70.9 percent respondents believe dealing with the issue smartly would help improve family relations, while 61.1 percent of respondents thought the couple should visit both sides' families on a rotating basis.According to the survey, 33.8 percent will visit both parents' families this year; 27.7 percent are planning to visit the husband's parents; and 20.6 percent will visit the wife's family.

Wu Jiang (pseudonym), from Nanchang, Jiangxi Province, plans to visit his wife's parents this year. "Last year we went to my hometown. My parents' hometown is far away from her parents', and we have very different customs during the Chinese New Year. Each year, choosing which side to visit will sometimes lead to arguments," he told China Youth Daily.

Yu Qin, an assistant at a Beijing IT company, plans to visit her parents' home in Tianjin and then visit her husband's parents in Chongqing in Southwest China. Yu said while her mother-in-law is nice to her, "I miss the dumplings and heaters in Tianjin," she said.